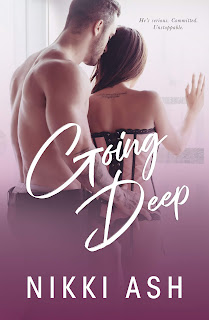 If I had to pick just one, enemies-to-lovers would be the one I'd choose to in terms of romance tropes. There's something about reading about two people who have such disdain towards each other end up becoming lovers and then get that happily-ever-after that neither one of them ever even considered with the other.  Nikki Ash does the trope proud with Going Deep, the second novel in her Imperfect Love series, featuring thirty-one-year-old professional football player Killian Blake and twenty-six-year-old interior designer Giselle Winters. Both Killian and Giselle were supporting characters in the series starter, The Pickup, and while I did like that first book, this second one turned out to be way more than I had hoping it would be, raising that proverbial bar for the rest of the series.

Their respective best friends may be madly in love with each, but there is no love lost between Killian Blake and Giselle Winters. They both have a tendency of dating a lot of people, neither one having been in any sort of relationship--Killian in the last ten years and Giselle in the last six. These serial daters think they've got each other pegged: Killian sees Giselle as nothing more than a gold digger going through a list of eligible men with loaded bank accounts until she finds the one who'll be able to meet all her material needs, and when Giselle recognizes a woman Killian has with him one time, she thinks he's the sort of guy who pays women to have sex with him. What they are about to learn is that these two broken and lonely individuals have more in common than they believed...

There was a lot more to dislike about Giselle and Killian than to like in the first few chapters of the book, but Nikki Ash made sure readers got to see that these two knew how to recognize the error of their ways and make up for them. I loved getting to know these two better throughout the book, and the evolution of their relationship from enemies to friends to lovers and then more was one that had me becoming fully invested in their happily-ever-after. There's some angst to their story, and it was just enough that it never felt like put-on drama and the angst addict in me was gloriously happy at that. The flow of the story was steady and the development of the characters was spot-on, resulting in me satisfied enough to give Going Deep a very much-deserved five out of five stars rating. ♥