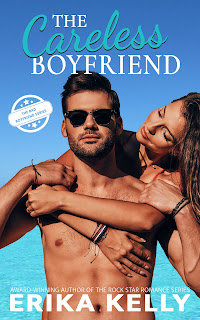 Why is it that every new release in the Bad Boyfriend series leads to me knocking down the current top Erika Kelly book boyfriend down a notch and replacing him with the newest Bowie brother who's snagged my attention and affection?! See, that's what just happened after reading The Careless Boyfriend, the third novel in Kelly's on-going series about four brothers who have carried on the legacy of their father when it comes to both business and sports. Among the four, it's second to the youngest Gray Bowie who now lay claims over my finicky heart. His story is one about unrequited love, keeping parts of yourself from those closest to you, and pursuing your own dreams.

The Bro Code is a sacred thing, but Gray Bowie had no qualms breaking one rule for years: falling in love with his best friend's girlfriend. It doesn't really excuse him that said girlfriend was Calliope Bell, and that Callie was his other best friend, or that his friendship with Robert Granger had changed ever since the guy became an addict. Gray made the conscious choice of walking away from his own unhealthy addiction to Callie seven years ago after loving her for twelve years. When they see each other again, he offers to become partners with the aspiring wedding dress designer, but will it be possible for them to mix business with pleasure? Unfortunately, for Gray and Callie to have any hope of a future, letting go of the past and false assumptions will be necessary for these old pals.

First things first: I LOVED GRAY! The guy truly was so much more than how other people--including his own brothers--saw him. He was a champion athlete AND a successful business owner who never rested on his laurels. I loved his humility and his genuine love for family and friends. He was the main reason why I liked this book as much as I did, followed by the angsty feels and lighthearted moments. Unfortunately, I didn't like the Callie from when they were teens to the grown-up version. The girl couldn't see beyond her own nose, blaming Gray from walking away from her yet taking full advantage of his friendship then and now. She had such little faith in this guy who she supposedly considered her friend. So yeah, she was least favorite thing about what was an otherwise good read that had an awesome hero and has me excited for Brodie's book. Four stars for The Careless Boyfriend. ♥