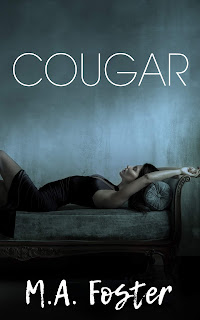 Cougar is the third novel in the Heritage Bay series penned by M.A. Foster, and it's the story of a woman who found the love of her life at eighteen and spent the next twenty-two years creating a home and family alongside him only to have it all taken away by a brain tumor. Now forty, Emerson King née Mackenzie, is a single mother to her teenage daughter, Jayla, and leaves behind the home she shared with her late husband, Marcus, in California order to abide with his final wish that she and Jayla return to her hometown of Heritage Bay in Florida. She's already lost the man she's loved for more than half her life, and now, she's forced to start over, dealing not only with her own grief but that of her daughter. She mourns Marcus, but she knows he wouldn't want her to wallow. Emerson, however, isn't ready to fall in love again, especially with someone twelve years younger than her and who happens to be her younger best friend AND the younger brother of her former best friend: Cameron Parker.

Emerson went from being a wife and mother to a widow and single parent, and her journey to trying to start a new chapter in a story book that she thought had its happy ending signed, sealed, and delivered was both heartrending and hopeful. I have a thing for May-December love stories that have an older woman and a younger man rather than the more common older man and younger woman scenario, and the author did a commendable job showcasing the ups and downs of being in this sort of relationship as well as all the other stuff that was going on with both Emerson and Cam. I highly recommend that, if you can, read the Heritage Bay series in order: Jaybird, Mackenzie, and Cougar. I'm not going to mention who the first two books are about because, hello, spoilerville, and the timeline can get screwy, but because there is SO much that goes on in Emerson and Cam's story plus all the side stories, it's easy to get lost in everything. At the end of the day, as much as I liked M.A. Foster's writing, there was just a lot going on, making for a much longer book than I personally felt necessary. Four stars for Cougar. ♥