Release Blitz: Living on a Dare by Grace Kilian Delaney 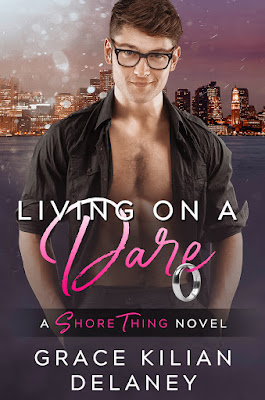 
About Living on a Dare
Stuntman Draven O’Connor never turns down a dare—even if it means getting down on one knee to propose to his former college roommate and friend. The same man he’s been crushing on since the first day they met. The same man that has grown distant over the past year. And the same man who just agreed to be his fiancé.

Julien Bouchard is tired of living a lie. He spent the past year exploring his sexuality in secret, enduring countless dates with women to appease his mother, and dodging his best friend, Draven, who knows everything there is to know about him, except the one thing that could change their friendship. Ready to face his friend, he meets him at a bar and is greeted by an unexpected marriage proposal. The dare isn’t surprising; it’s the scorching hot kiss that sends Julien’s head and heart in a tailspin—and gives him an idea for the perfect plan.

But perfect plans are never go according to plan, and news of their fake engagement spreads to their families as fast as a wildfire, forcing them to confront their true feelings about each other and hope they don’t get burned.

Add Living on a Dare on Goodreads. 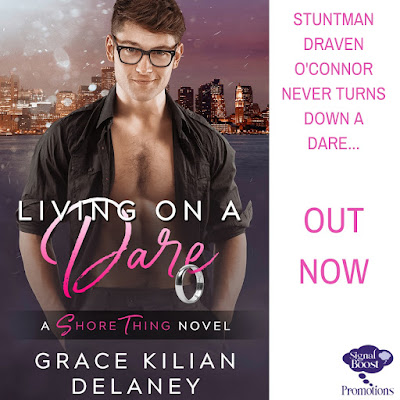 About Grace Kilian Delaney
Grace Kilian Delaney is a LGBT writer, musician, animal lover, and author of the sweet and sexy bisexual romance Living on a Dare: A Shore Thing Novel. She spends her free time performing kitchen concerts to an audience of her two cats and a dog and loves long beach runs. Her previous books include Seven Minutes (Dreamspinner Press) and Waking Oisin (NineStar Press).