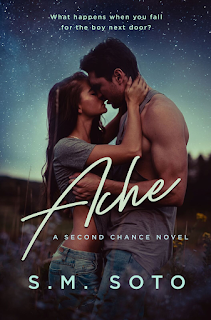 Ache is a standalone novel by S.M. Soto about a second chance with one's first love and it's also my first read from the author. It's been nine years since Bea Norwood and Liam Falcon first met and six years since Liam left and broke Bea's heart, but those years in between are the ones that Bea holds on to when her recurring nightmare comes barging through her bedroom door. She's been adrift in a world of pain and fear for years, leading her to become a shell of the girl she used to be. It's this Bea that Liam encounters when he finds his way back to the place he'd once called home, and he isn't quite sure what to make of it all. When everything ended between the two of them when she sixteen and he was eighteen, he tried his hardest to move on but his heart still belongs to the one girl he's never forgotten. Liam's return brings back a host of memories, both good and bad, but will it also mean the end of the heartache they've been going through for years? Will Liam still want to be with Bea once he learns of everything she's suffered through?

A word of caution: this book contains material that could be potential triggers, specifically those to do with repeated sexual assault including rape. Bea's story is not a particularly easy one to read, and while I may have been able to read through all those more graphic parts each and every single time (and yes, they were numerous), I'm almost a hundred percent positive not everyone will. I thought I would be more emotionally invested in the both the story and her as a main character, but surprisingly enough, I wasn't. I'm not exactly sure why there was a disconnect, and that disconnect? Well, it extended to Bea and Liam as a couple. For two people who were supposedly as in love as they were, there was a whole lot of miscommunication--or flat-out lack of communication--and jumping to the worst conclusions possible, which extended to other people and made me wonder just how others saw her, particularly this guy who never stopped loved her. So, yeah, I just couldn't get into either the characters or the story, and if that makes me come off as callous because of the subject matter, let me say this: it had nothing to do with the subject matter and a lot to do with characterization and cluelessness of all concerned. Three stars for Ache. ♥