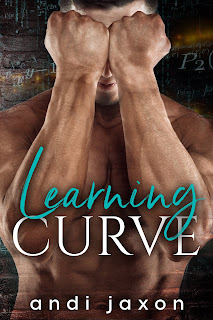 Learning Curve is an M/M teacher-student romance, and it's my first read from Andi Jaxon. This is the story of twenty-three-year-old down-on-his-luck college senior Benjamin Wallace and thirty-six-year-old popular calculus professor Alister Bennet. Ben is at risk of losing his scholarship if he doesn't pass the one class he knows he barely has any hope of doing well in on his own: calculus. He reaches out to his professor--the same professor he's had a crush on for quite some time--but Ben's nerves get the better of him as do his anxiety. Lusting over his straight professor would be a no-no, but then so is a professor lusting over his student who happens to be more than a decade younger than him. Teaching at a Christian university means Alister has to keep his sexuality under wraps, and it's never been an issue for him--until he meets the very broken-looking Ben. Ali knows he could lose his career if he pursues his feelings for Ben, but every time he encounters the younger man, he can't help but to reach out and offer whatever support he can. Both men have much on the line, but will they risk it all for a shot at true love?

With a blurb that held promise, I had relatively high but what I felt were easily attainable expectations for this title, and while I did like both the main characters, there were quite a few plot holes. Going forward, there may be spoilers, so consider this your heads-up. Ben struggled with Alister's class, but other than that first time Alister tried to tutor him in the bar slash pool hall--where they proceeded to get all hot and bothered and got nothing more than a grin from one person in the place--I have no idea how he manged to pass and then graduate. Then there was Ben's abusive foster father who supposedly was still on the lookout for Ben five years after Ben got away from him. Imagine, he couldn't find Ben for five years and then all it took was for Ben to land in the hospital after being attacked by these bullies who had it out for him--and showed up out of the blue before sneak-attacking him that second time--for Dan (aka the foster father) to show up and basically forcibly take him. It made no sense, considering Ben hadn't been ID'd by the authorities who took him to the hospital in the first place. Then there was the whole encounter in the backseat of the car right before Ben was going to meet Alister's parents for the first time...and this was soon after being kept against his will for days by Dan! Seriously? What the heck is up with that?

So yeah, as much as I liked the characters in this book, the story fell short because a lot of the stuff was more after the fact wherein we only know what happened because it's relayed by either Ben or Alister, taking away from the whole experience. I only gave three examples above, but there were other things that were resolved but we have no idea HOW they were resolved. Based on the angst and the cast of characters and the actual story line, I'm going to be giving Learning Curve three stars, but because this did falter in execution time and again, I was left wanting. ♥