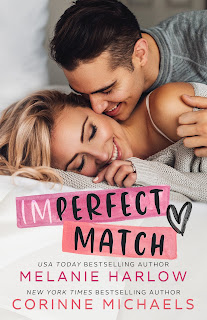 “Then why have you been ignoring me for three days?”

He folds his arms over his chest. “I was just giving you some space to breathe.”

A sob catches in my chest. “I can't breathe without you.”

“And I can't be with you all the time and not want you.”

When bestselling authors Melanie Harlow and Corinne Michaels announced last year that they were working on a book together, countless romance readers like me were excited to see what these two fan favorites would create. I quite liked Hold Me Close, and I had hoped this wouldn't be a case of "one and done". Well, fortunately for me and my fellow bookaholics, Harlow and Michaels have joined forces once again, and this time around, they've written a friends-to-lovers story with a bit of a twist and a whole lot of romantic comedy feels and a bit of my beloved angst.

Imperfect Match is the story of best friends and neighbors Willow Hayes and Reid Fortino. Told in dual perspectives, their romance doesn't begin with either one of them secretly pining for the other. Nope, these two are nothing more than honest-to-goodness besties who have a slightly unhealthy co-dependency thing going on if you ask Willow's mom. In order to ensure that the matchmaking business her mom started doesn't get sold to a stranger, Willow agrees to take on a client who has made it clear he doesn't believe in love and marriage: Reid. It shouldn't be difficult, not since she knows Reid all too well. The problem? Willow is falling for her reluctant client!

This was a really great read packed with lighthearted feels and doses of angst, which I was all for, naturally. I loved Willow and Reid's friendship and while it truly was platonic for the two or so years since they became neighbors and best friends, theirs was the sort of connection that simply needed a nudge...okay, with these two, they may as well have needed a push. I would have gladly shoved these two along, but that would have made things too easy, and Willow and Reid needed to recognize that what they had was the sort of love that was worth fighting for. There were a couple of points in the story where I honestly felt my heart clenching in my chest because I was so invested in them. Melanie Harlow and Corinne Michaels have done it again with Imperfect Match. Five-plus stars. ♥