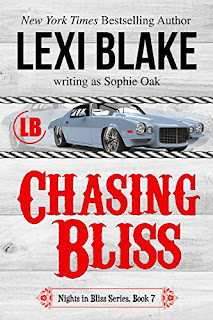 Seven books in and I'm still addicted to Lexi Blake's Nights in Bliss series! For such a small, close-knit town, murderous abound, but hey, that's all part of what makes the town of Bliss, Colorado a memorable one. In Chasing Bliss, we have ourselves Gemma Wells, a lawyer from New York who not only discovers her fiancé is cheating on her but loses everything she worked for all in one day. She decides to make the move to Bliss, her mother's hometown. Her mom is happy to be back home breathing in the Colorado air, but Gemma has yet to find her footing in a place where someone as blunt and bitchy as her makes her even more of an outsider. She has a fan, however, in mechanic Jesse McCann; his foster brother and fellow mechanic, Cade Sinclair, though, not so much. Jesse thinks Gemma just needs to open her eyes and heart to the town and people of Bliss, particularly Jesse himself. He's used to sharing with Cade, but while Gemma sees Jesse as sweet, she's nicknamed Cade the "Bare-Chested Ape Man". Will it take threats to Gemma's life for these three to realize that they truly belong together?

Gemma wasn't the easiest of main characters to like; she made it difficult with her disparaging remarks and put-downs of both Bliss and its people. There were moments her softer side would surface, but when that harder part of her was present, I wasn't really sure if it was actually just a facade or if it really was who Gemma innately was as a person. I liked both Jesse and Cade, especially because these two balanced each other out and managed to pull back the one who was on the verge of whatever negative thoughts or emotions may be plaguing them. If I had to choose, I'd probably pick Cade over Jesse, and a lot of that has to do with how Jesse seemed to be trying to change Gemma rather than accept her for who she was. While he may have had his reservations, Cade was someone who tried to protect all parties from getting hurt, and when he finally did realize his feelings for Gemma, she became his top priority, and goodness, but how that man showed just how much he loved her. Le sigh. So, while Chasing Bliss was not my favorite read in the series, it was still a good addition and fits in with the rest of the books. Four stars. ♥