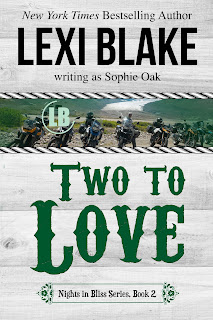 Lexi Blake takes us back to the town of quirky town of Bliss, Colorado with the second novel from her Sophie Oak-penned Nights in Bliss, Colorado series. This second edition of Two to Love is a second-chance romance featuring Callie Sheppard, who was introduced in the series starter, Three to Ride. With the help of one of her best friends, her quest to lose her virginity at twenty-five is successful when she spends the weekend with Nathan Wright and Zane Hollister. She also manages to fall in love with them and then promptly gets her heart broken when they disappear with nothing more than a terse note. Life goes on back home in Bliss, but after six years and the death of her beloved mother, Callie wonders if it's time for her to go elsewhere and find the kind of happiness two of her best friends have found with the woman they've married. While she's still in town, though, she needs to help the new sheriff in to his duties. It should be easy enough...and then she realizes who the new sheriff is: Nate Wright, and he's got Zane in tow. The two confident men are feeling lost and broken, but as much as she wants to take care of them, Callie refuses to get close. What she didn't count on, however, was how determined they'd be to claim her again--heart, body, mind, and soul. But does Callie fit in their world and do Nate and Zane fit in Bliss, Colorado?

Callie's story was hinted at in the first book, and had I been left the way she had been, I would've been both hurt and angry as well. She was a virgin when she let Nate and Zane into her body and heart, and the manner in which they decided to leave her was both abrupt and rather callous. I get it. They HAD to leave, but there were other ways to do it without giving her false hope yet conveying that they did, indeed, care about her. Of course, that's all part and parcel of the story, and it's what makes the whole getting back together thing precarious in the beginning, making for a more entertaining read. I liked Callie and how she didn't immediately fall back into the arms of either man even though she still had feelings for both of them. Now, as far as Nate and Zane were concerned, well, they had their pluses and their minuses, and I admit that I was shocked to find myself being more irritated with Nate than with Zane. My two favorite things about the book, though, were the action and suspense and the townsfolk of Bliss. From the Harper twins and their wife Rachel to Callie's two other best friends, Stefan Talbot and Jennifer Waters plus the other offbeat people that make up the town that I'm finding myself fond of already. I've loved discovering these Sophie Oak stories from Lexi Blake, and look forward to Stef and Jen's book next! Four stars for Two to Love. ♥