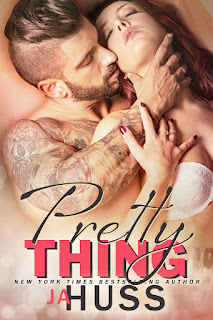 Well, now, this book was SO not what I was expecting it to be. I mean, it's from JA Huss, so naturally, I would expect it to have a high quality of writing. In terms of the direction the story took, however, I was surprised and happily at that. Pretty Thing is a friends-to-lovers slash falling-your-best-friend's-sibling romance with a generous serving of angst--which, of course, makes the angst addict in me quite happy. This wasn't a particularly long read, but it packs a heck of a punch to the heart in less than a hundred and fifty pages, making for a fab love story with all the feels.

Aiden Edwards was eight years old when his family moved from the city to a small town, and from the moment he met fraternal twins who were the same age as him, their friendship was cemented for eternity. As the years passed and they became teenagers, Aiden couldn't stop the crush he had on Kali Anderson even if he wanted to. His best friend and Kali's twin brother, Kyle, however, tried to nip said crush in the bud with five words: "You were my friend first." But now, Kyle is gone, and as Aiden and Kali mourn their loss, their torn between their feelings for each other and the guilt that lingers between them. All they wish for is Kyle's blessing...something they'll never receive.

Three best friends--two of whom happen to be siblings and twins at that--and then one dies tragically in an accident, leaving the other two to figure out how life will be going forward without the one person who's been such a constant in it. First things first: I seriously liked that Aiden and Kali (and Kyle, for that matter) were all thirty-four when the book starts. The three central characters being in their mid-thirties was an appreciated change of pace from the usual twenty-somethings that land in my review pile. The story line itself was also somewhat of a shift from the norm for me, and JA Huss's creativity and originality are on full display and serve as a reminder of why she has as strong of a following as she does. I'm keeping this spoiler-free; just go read Pretty Thing. Five stars. ♥