Review: Crazy for Your Love by Lexi Ryan (Boys of Jackson Harbor #5) 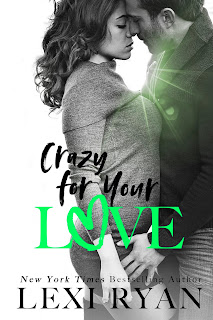 Crazy for Your Love is a friends-to-lovers romance and the fifth book in bestselling author Lexi Ryan's Boys of Jackson Harbor series. Carter Jackson doesn't see himself as a hero; he's simply a firefighter who does his job. Unfortunately, all it took was one photo of him shirtless and covered in soot with a puppy he's rescued from a fire in his arms to go viral to have a whole lot of unwanted attention thrown his way. In order to avoid being bid on during a charity auction, Carter surprises everyone with his announcement that he's donating money to the charity because he's madly in love with someone already: his close friend and nurse Teagan Chopra, who happens to be as surprised as the rest of the crowd. With her sister's wedding fast approaching and her mother having invited Teagan's ex-boyfriend, she asks Carter to continue the charade of being in a fake relationship in order to avoid said ex. They're ready to pursue their chemistry while keeping their friendship intact, but as their feelings intensify, will they still want to be "just friends"?

Carter and Teagan's may have been friends but they were friends who happened to be quite attracted to one another. Kisses have been exchanged, and when the two decide to not only to do something more about their attraction but to also pretend to be in a relationship for their respective reasons, things, as expected, become far more complicated. I liked the flirtatious friendship that these two had, and when they crossed that line from platonic to far more personal, it was pretty clear that they had a connection. There were a lot of lighthearted moments, but the book also had some really angsty ones, especially when it came to stuff in their past that they were still saddled with--guilt on Carter's part and shame on Teagan's. One of my favorite things, however, had to do with Carter's relationship with seventeen-year-old Isaiah Goldright. I won't divulge details on who Isaiah is, but he tugged at my heartstrings, and they way Carter was with him showed a whole new side to the hot firefighter. Happy sigh. Four stars for Crazy for Your Love. ♥