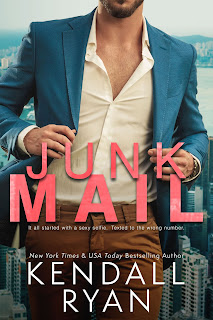 I'll be honest: Dick pics are a turn-off. And no, it has nothing to do with lighting or aesthetics. I'm not a prude, but there are just some things I don't need to have a visual memory of on my phone. Thank you; next! I certainly wouldn't be glancing at it repeatedly, what more if it were an unsolicited send. But see, that's exactly what Peyton Richards once she receives the dick pic that beats (snort) all others by a mile (and no, I'm not talking about length...maybe). It's all a matter of her sender being given the wrong number, and the lucky recipient just happened to be Peyton. All's forgiven, but not quite forgotten, especially not when the important meeting Peyton has with Wine O'Clock's representative turns out to be with Josh Hanson--the same Josh Hanson of dick pic fame. Aww...kward! But the two agree to keep things professional...except they're both madly attracted to each other. When their secret relationship puts at risk the respective businesses they've built, will one of them be forced to walk away, or could there be a chance for Peyton and Josh to have a happy ending professionally and personally?

Just a note: the blurb for the book made it sound like an enemies-to-lovers romance, when in truth, it isn't. Peyton doesn't hate Josh for sending the dick pic, nor do the two of them engage in some weird debate via text message that same night. Peyton also doesn't look at Josh with hatred or disgust when they first meet. There's also a quote mentioned in the blurb, but that isn't even thought by Peyton till nearly three quarters of the way into the book. All those blurb-y things aside, though, I quite enjoyed this book! I seriously liked Peyton, who was every bit a woman who had ambition and fortitude but still loved her grandmother--who was a hoot!--best. I liked Josh as well, save for one particular bone-headed decision he made. For the most part, this book had me smiling with the banter between Josh and Peyton. Any issues their relationship faced was really due to a whole lot of lack of communication, but there aren't any major angsty moments nor was there any unnecessary drama plaguing these two main characters or their romance. Junk Mail was an ideal romance to kick back with, and it receives 4.5 stars. ♥