Review: Starting from Zero by Lane Hayes (Starting From #1) 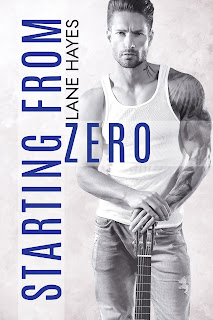 “I have no idea what love is, but you're the person I want to be with all the fucking time.”

He gave me one of his signature slow grins, the one that turned me inside out and upside down. Then he pushed the hair from my forehead and pulled me close. “I feel the same way, Jus.”


One of my favorite go-to authors returns to the rock star romance trope with her new series, Starting From, which gets off to a fantastic beginning with Starting from Zero, a May-December story between a promising musician whose dream is for his band to be noticed for their talent and an established, award-winning songwriter who never expected to find love with a much younger man who never fails to surprise him. Twenty-six-year-old Justin Cuevas and forty-four-year-old Gray Robertson may come from two different generations, but music and more may be enough to bridge whatever gaps exist between them. However, when the past is revealed, who will face the music and fight for what they're both building, and who will walk away and live with the deafening silence of loneliness?

If you're familiar with Lane Hayes's writing, particularly her ongoing Out in College series, Justin Cuevas should be a familiar enough character, having been introduced in the most recent release in that series, Out in the Offense, as Rory Kirkland's older brother. I quite enjoyed getting to know him far better in this new series starter, and the way his mind worked was thoroughly fascinating. He had this swirling energy about him that saw him constantly in movement but also had this quietness about him that I was rather captivated by. I liked that his bisexuality was a bit more complicated than it originally seemed to be when it was mentioned in Rory's story. His closely held notions when it came to love and romance called to the cynic in me while the romantic side knew he'd see what he was missing sooner or later, especially since Gray Robertson was an enigma that had Justin absolutely spellbound.

Ah, Gray! There were parts of Justin that I empathized with, but when it came to Gray, there was quite a bit about him that I recognized. I loved that he was so close in age to me (yay for main characters in their forties!) yet didn't allow the age to limit them in any sort of way. His quiet demeanor belied his far dirtier side whenever he was with Justin. As the old adage goes, it's always the quiet ones, and it was another thing that I could relate to since my family and closest friends like to "warn" people off that they may be surprised by what was swirling beneath the calm outer layer. Inasmuch as it would be easy to peg Gray as a mentor of sorts to the younger Justin, he also learned a thing or two (or ten) from him and tapped into the more carefree part of himself. He may have seemed like the complete opposite to Justin, but the things that brought them together just outweighed all the other stuff.

I loved how this book had a feel to it that was like Justin--at times frenetic, other times subdued. Lane Hayes is a master of crafting stories that are easy reads yet they're not overly simplified tales that end with happily-ever-afters. Yes, the happy endings are there, but as evidenced by her past characters and stories and once again here with Gray and Justin and their tale, we get multi-layered individuals and complex back stories that make for reads that have proverbial meat to them. While Justin may be more complicated than Gray, it doesn't mean that the latter doesn't have issues plaguing him--he just happens to be more adept at trying to move forward but still, these things were holding him back somewhat. I'm also now VERY curious about the rest of the guys in Zero--aka Justin's band--and if only Johnny and Tegan, the guitarist and drummer, respectively, will get stories or if Ky, the bassist, gets a book, too. Simply put, I'm excited over the Starting From series, and give Starting from Zero five-plus stars. ♥

Purchase Starting from Zero on Amazon.