Review: Falling for the Beast by Skye Warren (A Modern Fairy Tale #2) 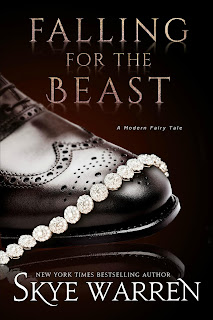 Falling for the Beast is the second novel in the Modern Fairy Tale series, and it concludes the story of Erin Rodriguez and Blake Morris. As mentioned by Skye Warren in the blurb for both books in the series, these were originally released as a five-part novella-type series entitled Beauty several years ago. Book one, Beauty and the Professor, basically has the original three parts, and book two has the original final two parts (Beauty Becomes You and Loving the Beast). These have been reworked a bit and the series has been tied in to the author's Tanglewood universe. The two re-edited novels must been read in order because they are directly connected to one another.

As much as Erin Rodriguez and Blake Morris love each other, there are obstacles in their way to a happily-ever-after. Blake would love nothing more than to claim her for all the world to know that Erin belongs to him and he belongs to her, but with his career, and more importantly, her graduation on the line, the best thing would be for them to keep their distance in order to not add fuel to the fire. If they have any chance at being together the way they want, Blake and Erin will need to hold on and trust in each other and in their love that is worth fighting for.

This second book picks up where the first one left off, and even though I already knew what was going to happen because I had read the original five-part series before, I still enjoyed re-reading Erin and Blake's story. There's a whole lot of heat here, but there's also a lot of sweet and romantic moments that go on between Erin and Blake. I liked re-acquainting myself with them and would have no qualms reading again. Four stars for Falling for the Beast. ♥

Read my reviews for the Modern Fairy Tale series:

Beauty and the Professor (book one) - four stars - My Review