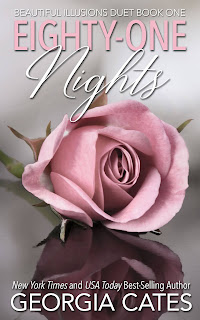 Sigh. I'm not sure if it's just me or if it simply isn't my weekend for books that I can fall into and lose myself for a couple or so hours. It's been almost two years since I last read a Georgia Cates novel, and while that last read didn't click with me, I've enjoyed nearly everything else of hers that I've read. With Eighty-One Nights, Cates makes it clear from the get-go that she got her inspiration for this new book from a number of previous ones that she's penned. My curiosity got the better of me, and I wanted to see how she would use said inspiration and give it something fresh and creative. Yes, Cates's writing was familiar, but not in the way I had entirely hoped because this first book in her Beautiful Illusions duet felt more like a rehash of those old books of hers that the author had mentioned, which in turn had me feeling rather disappointed.

We have the girl who is down on her lack and the rich guy looking for a distraction--and in this incarnation, the girl is a twenty-two-year-old American named Caitriona Louden and the guy is a thirty-three-year-old Scot named Maxwell Hutcheson, aka Cait and Max or Lou and Hutch. It was supposed to be nothing more than an arrangement, a "girlfriend experience" if you will. Feelings were never supposed to be involved, but well, best laid plans and all that. If you aren't familiar with Cates's previous books, then there's always the chance that you could enjoy the story and characters here. After all, my issue here doesn't have anything to do with the author's writing in general but more of this feeling like a rehash of her past work. I was hoping for more, and while Cates's writing is commendable, the lack of a creative twist to this edition left me wanting. Eighty-One Nights gets three stars, and I have yet to decide if I'll be reading the next book. ♥