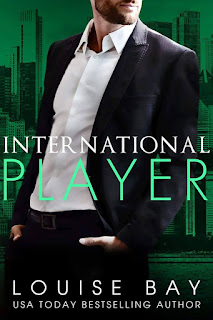 I originally listened to Louise Bay's International Player when it was released as an Audible Original a few months ago, and when the ebook was slated for publication, I knew I wanted to experience this friends-to-lovers romance once again. This is the story of Truly Haybury and Noah Jensen. Truly's harbored a crush on Noah, but she knows someone like him would never consider someone like her anything more than a friend. She doesn't think she's as beautiful or confident as her twin sister, so why should Noah see her as someone he'd be interested in? He's a player, after all, and the fact that Truly is the first female he's ever just been friends in tells you something. When Truly is forced out of her comfort zone in order to take over her sister's responsibilities with their family charity, Noah knows he can help her step up her game. Socializing and being charming and self-assured will allow people to see that she's more capable in handling her family's charity than she gives herself credit for. And the more time Noah spends with Truly, the more he realizes that he's falling for her. Can he convince her to be more than friends?

The story manages to maintain the charm it originally had when I listened to the audiobook back in January, although if I'm being perfectly honest, I may prefer the audiobook a tad more than the ebook thanks in large part to the fantastic narration of Saskia Maarleveld and Shane East. With Truly having nursed feelings for Noah and to not have them returned would be heartbreaking, but these two managed to become the closest of friends. The fact that Noah flew to the US and stayed there for six years led to them losing touch, and maybe that's why when they rekindled their friendship, Noah began to see Truly in a different light. After all, absence can either make the heart grow fonder or lead two people to wander off and find someone else. It took a bit for me to feel connected to Truly and Noah as individuals, but once that connection was made, I enjoyed seeing how these two would go from friends to friends with benefits to committed partners. Overall, International Player was a fun read to curl up with for a couple or so hours, and if you have never read Louise Bay before, this is a good place to start. Four stars. ♥