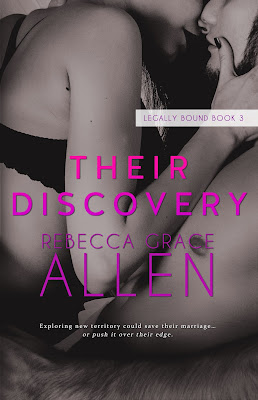 About Their Discovery
Exploring new territory could save their marriage…or push it over the edge.

Samantha Archer's life has hit a wall. Her world is housework, homework and reminding her husband—the biggest kid in the family—to help out at home. Once she felt confident, powerful and sexy, but Brady doesn’t seem to notice her anymore, and now all she feels is invisible.

Brady has tried being the goofy guy who stole Sam’s heart, but it’s not working. He’s losing the woman he loves and doesn’t have a clue how to fix it. He’s keeping his darkest fantasies hidden too, sure they’re not what Sam wants, and his inability to please her cuts him deeper than she knows.

When Sam lands a new job at a law firm, Brady still won’t pick up the slack, and one night giving him orders unexpectedly reignites their missing spark. Sam discovers the Femdomme she didn’t know she was, kindling Brady’s submissive desires.

But while things heat up inside the bedroom, life outside it starts unraveling. Brady's need to call the shots at work complicates his hunger to kneel for his wife, and Sam has longed to experiment in more ways than one. Their exploration of dominance and submission goes a step too far when they invite Sam’s sultry switch coworker into their bed, and the fallout could cost them everything. 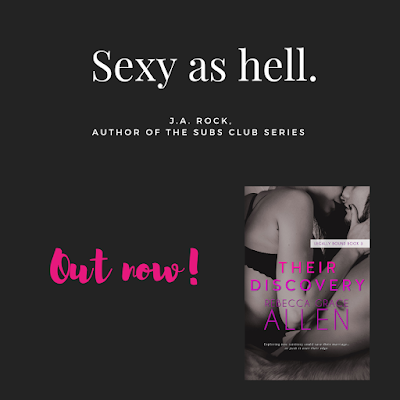 Add Their Discovery on Goodreads. 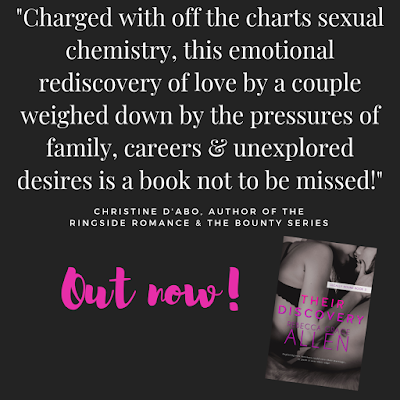 An Excerpt from Their Discovery
It was a shock, to discover they’d been longing for the same thing all along—a past she thought they couldn’t recapture. Sharing these desires built a tenuous bridge between who they were in the bedroom and outside of it.

His eyes changed. Darkened with desire.

His voice dropped to a low rumble. “Yes.”

“It’s how I think of you, when we’re like this. My eager—” She fingered the collar of his shirt. “—hungry—”

Stroked her fingertips down it.

Ran her palm beneath the hem.

His breathing was quick and shallow. Sam grinned.

Brady’s throat worked. He licked his lips. “May I call you…Mistress?”

She hummed happily. “You liked that last night.”

Brady nodded slowly, as if in a trance. She’d thrown that word out on purpose, needing to sate this curiosity, to see once and for all if this fantasy was real.

“I like that title. Much better than ma’am. So yes, you may call me that. But there’s one more word we need to discuss.” She put the iPad on her nightstand. “Your safeword.”

“It would be bad if I used Beetlejuice, right?”

She wanted to flick him for breaking the mood, but she’d done that herself moments ago. And it was funny. “Only if you say it three times.”

Brady chuckled out a nervous breath. Sam crawled over him, hovered her body a few inches away, and waited.

Sam paused, everything in her going soft and sweet. “Kafka?”

“It was the first thing—”

That book had been a challenge to help him with, especially with his constant jokes about giant cockroaches, but he’d done well on his paper and she’d been proud of him. Damn, she hadn’t thought he’d remembered.

Sam bent over him, kissed his lips, licked into his mouth until his tongue danced along hers. “Now, pet, time to get that pretty body of yours all messy.”

Brady made a noise she couldn’t define after that. The choked sound of an animal being caught by its prey, giving in to its lovely death.

He gave his consent in the fluttering of his eyelids, his head tilting back as she unzipped his pants and slid them down. Sam pushed his pants over his feet, then his boxers, then tossed it all to the side.

“What about you?” he asked.

“You mean I should come first?”

He nodded, then shuddered helplessly as she circled her palm over his slick tip. She’d been cruel last night, making him hold back when he couldn’t.

“I’ll want that, most of the time. And I won’t want you to come without my permission, either. But not right now.” She stroked his straining erection, and he stuttered out a moan. “Right now is for you.” 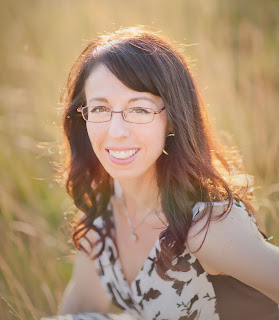 Rebecca Grace Allen holds a Bachelor of Arts in English with a double concentration in Creative Writing and Literary Comparison as well as of Master of Science degree in Elementary Education, both of which seemed like good ideas at the time. After stumbling through careers in entertainment, publishing, law and teaching, she’s returned to her first love: writing. A self-admitted caffeine addict & gym rat, she currently lives in upstate New York with her husband, two parakeets, and a cat with a very unusual foot fetish.