Review: Thirst for You by Jaclyn Quinn (Beyond the Cove #2) 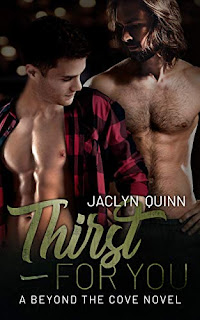 Jaclyn Quinn is one of those authors who end up on my go-to list all based on their debut release, and with each new book they publish, I'm rewarded by the knowledge that my instincts were right in the beginning. Quinn's latest novel is the second in her Beyond the Cove series, a spin-off of her Haven's Cove books. Thirst for You is a falling-for-your-best-friend's-sibling story has a May-December touch to it, what with the main characters sharing a twelve-year age difference between them. This can be read as a standalone, but hey, this is a great series, so why not read the series starter, Drawn to You, first, and maybe even the novels in the original series? Great idea, yes?

Zachariah Taylor is protective by nature. The forty-year-old is the eldest in a brood of eight and has been more of the head of the family than "just" the oldest brother. In recent years, though, he doesn't feel as needed as he used, not with some of his siblings finding love and settling down with their partners. Maybe it's time he do the same, but he hesitates to act on his attraction to Drew Belford, his brother's twenty-eight-year-old best friend and an employee of Zach's working at his eponymous bar and grill. The age difference alone gives Zach pause, and the whole complication of being Drew's boss further complicates things, no matter how irresistible Drew proves to be.

Drew Belford has had feelings for his brother's best friend for seven years. He knows all about Zach Taylor's protective nature, but with a suspected stalker setting his sights on him, Drew is becoming overly familiar with said protectiveness and he isn't liking it one bit. It's not that he doesn't appreciate Zach caring about his safety, but the last thing Drew needs is another brother to watch over him. Instead, what Drew needs is Zach--the man himself minus any brotherly-like feelings because Drew certainly doesn't see Zach in that way. The two men may decide to explore their long-held feelings for each other, but will it further incite the unknown threat to increasing violence?

From the sexual tension to the tension brought about by the suspense element, Jaclyn Quinn has penned a story that had me solely focused on my tablet from the moment I started reading till the very end. I may have correctly guessed who the villain was early on, but that doesn't mean that it lessened the enjoyment I had over this book or made me not look forward to seeing everything play out and revealed. Both Zach and Drew were main characters who were very easy to like, although I may have been tempted to smack Zach upside the head a time or two for how long it took him to get his act together. Thirst for You lived up to all of my expectations quite nicely. Five stars! ♥

Read my reviews for the Beyond the Cove series:

Drawn to You (book one) - five-plus stars - My Review

Thirst for You (book two) - five stars - My Review (posted above)

Purchase Thirst for You on Amazon.