Review: Drawn to You by Jaclyn Quinn (Beyond the Cove #1) 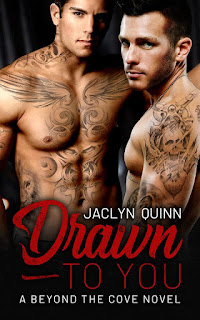 “I can't be that person for you anymore because I'll always want more, and you never will. And now I'm wanting things I don't have a right to. I want too many things I can't have.”


If Jaclyn Quinn wasn't already on my list of go-to authors after discovering her through her Haven's Cove series earlier this year, she'd definitely be added to it because of Drawn to You, the first novel in her spin-off series, Beyond the Cove. There are cameo appearances from Jonah Taylor and Cameron Vaughn--whose own happily-ever-after played out in the third Haven's Cove book, Hard to Hold--and the rest of the Taylor clan do have a presence in this new series starter since Elijah Taylor is Jonah's brother, but Drawn to You can be read as a standalone nonetheless (but this is me officially encouraging you to read the Haven's Cove series because it's one of my favorite finds this year and absolutely one of my best for 2018). It's angsty but with a fair amount of lightheartedness so anyone fearing that this may be too heavy a read need not worry. Just read it already, people!

Set in the New Jersey town of Brighton Pier, Drawn to You introduces readers to twenty-eight-year-old Elijah Taylor, a tattoo artist working at Inkubus, a tattoo studio owned by thirty-five-year-old Jake Novak. Moving away from his home state of New York and his close-knit family was made easier after Eli started working at Inkubus two years ago, having formed strong friendships with his fellow artists. What they don't know, however, is that he and Jake started hooking up ten months ago, but while Eli wishes they could have more, Jake has made it very clear that he isn't hoping for the same thing. In order to spare himself more heartache, Eli may be forced to make the painful decision to simply cut all ties--personally and professionally--but then Jake is hit with a devastating loss, and while he's got a strong support system in his friends, it's Eli's presence that he needs to lean on most. However, is this nothing more than a repeat of being Jake's temporary fix, or could this actually be a true chance at "more" for Eli?

What didn't I love about this book?! From the way the story played out to the development of Jake and Eli as main characters and the evolution of their relationship--as well as few other relationships that were connected to them but that I won't get into for fear of retribution due to potential spoilery things!--I don't have a single thing to complain about. Jaclyn Quinn made this a love story between two men as well as a story about love in the families we're born into and the ones that we create for ourselves through the kinships we form in our lives. I needed a couple of tissues while reading this book but then I'm super sappy and books that make me cry earn bonus points. Heck, if there had been a dog in this story, I don't know how many more bonus points I could have given! The supporting cast of characters highlights just how much potential I can already see in this series as everything moves forward, and I'm already finding myself quite excited to get my greedy hands on them as soon as possible (not sure if Zach Taylor's will be part of this fab series, but fingers crossed!). I'm giving Drawn to You five-plus stars. ♥

Purchase Drawn to You on Amazon.