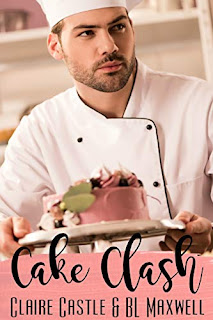 Cake Clash is a second-chance standalone romance penned by the writing duo of Claire Castle and BL Maxwell, and it also happens to be my first read from either author. This turned out to be a pleasant surprise of a read, as is what usually occurs when I try to keep my manage expectations with new-to-me authors. We're introduced to two pastry chefs who were once the loves of each other's lives in culinary school until they went their separate ways--Josiah Stevens and Finn Leighton. Years later, Josiah is now known as Chef Jos, a popular celebrity chef who co-owns a business, and when his business partner surprises him by telling him he's the third celebrity judge on a reality show called Cake Clash, Jos appreciates the change of pace. The next surprise, however, is one he could never have been prepared for--his ex is one of the competitors! Finn owned his heart for years, and if Jos is being honest with himself, it's never really been claimed by anyone else. The next six weeks pits Finn against others for the top prize, but is a second chance with Jos be the prize he wants most. What happens when the show wraps?

There's something about second-chance romances that have me wondering about what broke the couple apart in the first place and what will it take for them to overcome both the past and the present in order to have a future together? I liked both Finn and Jos and appreciated the authors' efforts in trying to give readers an idea of who these two were when they were younger and what's led them to become the people they are ten years after everything between them ended. I'm not entirely sure how Claire Castle and BL Maxwell divvied up writing duties, and while not seamless, they seemed to work well together, considering this was an entertaining enough love story with two main characters who were, for the most part, likable. However, it's the secondary characters that were most of note, and there were times where they definitely stole the spotlight from Finn and Jos. This does have a happy ending, and it really was a sweet--pun not intended!--story to read. I would definitely want to read more from Claire Castle and BL Maxwell, whether individually or a writing duo again. I'm giving four stars to Cake Clash. ♥