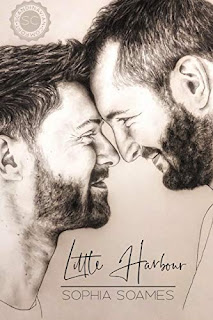 I went into Sophia Soames's debut release--and the first in her Scandinavian Comfort series--with, as always, a sense of hope. The blurb held a great deal of promise, and while I thought it was going to be far more angst-ridden than it actually turned out to be, I was quite happy that this, to a certain degree, did live up to that promise. This also happened to be a REALLY long read, but I guess the fact that I read this in one sitting speaks to its being good.

Little Harbour is a story about loss, but it also happens to be a story of loving and living again. It's been a year since Jens Sommerfeldt changed from being a husband and co-parent to a widower and single father. He thought he and Sofie had the rest of their lives together, but fate played its cruel hand, leaving Jens struggling to keep it together for himself, but it's his four children, Malena, Morten, Mikki, and Marthe, that he so desperately needs help with.

When he decides to turn PNN.com, a popular parenting site, he gets more than he bargained for. He gets the advice he needs, but he also stumbles upon the blog of the man touted as Norway's favorite midwife: Axel Kleve--the same Axel who he corresponded with, became his closest friend, and then more when they were teenagers. Now, Jens finds himself with a second chance at love and happiness, but how will his life merge with that of Axel's?

I more than appreciated the fact that this was a story that didn't try and sugarcoat the ups and downs of being a parent to four children. Take it from someone who happens to be part of a brood of five--now that I'm much older, I have a far better appreciation of what my parents went through and continue to go through, and how daunting it was for my stepmother to become part of our family, although in the case of Axel, Sofie had already passed away.

As far as I'm concerned, I liked what I saw from Sophia Soames's writing. This was her first published work, and it was, indeed, an ambitious initial effort. The lighthearted moments far outweighed the darker forays into the difficulties and complexities of Jens's and Axel's lives as individuals and then later on as a couple. The bonus portion of the book, though, had me reaching for tissues, and that's a very good thing. Five stars for Little Harbour. ♥