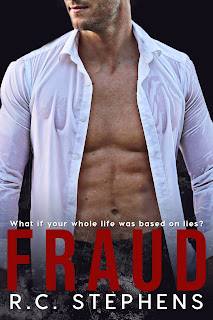 Fraud is a romantic suspense standalone from R.C. Stephens and it's the story of a woman who believed she had the sort of life that dreams were made of. Natalia Lopez had a husband who was five years her senior and loved her and they had two precious children who were her world. The family she had with Mark and Lily and Liam was everything she could have hoped for. And then she found out that the life she was living was built on lies. How could this man that she had been married to for more than a decade begin to look like a fraud? Hayes Taylor was a complication to her already confusing life. She's attracted to this man who is six years younger than her, and she's never been the sort of woman who would cheat on her husband, no matter how dire their circumstances may be. She also finds solace when she's around Hayes--but it also stirs within her a need to push him as far away as possible. And still she stays with Mark, but the man she once fell in love with is gone. In his place is someone she fears--someone who's well on his way to turning their dream life one filled with unfathomable nightmares forever.

This isn't my first R.C. Stephens book, but it has been a while since I last read something of hers and I'm glad that I chose this one to re-acquaint myself with her writing. This standalone had a good balance of romance and suspense, and while I can't go too much into the actual details of the story in order to not spoil it for those of you who have yet to read it, I'm happy to say that this was a worthwhile read, at least as far as I was concerned. For the record, this story spans several years, and it's told from the points of view of both Natalia and Hayes. It would be really easy to judge Natalia and question why she stayed for as long as she did with Mark, but the idea of keeping a family unit together is reason enough for many people, only realizing that it would have been better had they left sooner much later on. She did what she believed was best for her children, but then hindsight is always twenty-twenty. Hayes was, admittedly, my favorite thing about this book, and he's easily one of my favorite male main characters this year. If you're as much of a fan of romantic suspense reads as I am, check out the 4.5-starred Fraud. ♥