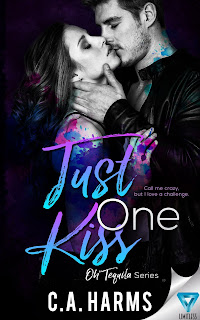 If I had to choose one series of C.A. Harms's that I would recommend to a new-to-her reader, it would have to be Oh Tequila. The first three books were hearty reading fare, leaving me excited for the next one to come. These were great reads, with a fine mix of fun and flirting along with a whole lot of falling in love and finally growing up. With the release of the fourth novel, there's a hint of something heavier due to the direction of the story line, but that doesn't mean that Just One Kiss was a depressing story. Far from it, but I did appreciate that, just like the three books before it, this novel managed to stand apart from the crowd that was the rest of the novels in this category or genre and from the others that were part of the series. If you've never read a Harms book, start with this series!

A hook-up is supposed to just a hook-up. A one-time thing. No repeats. Unfortunately for Palmer (whose last name I don't recall being mentioned, Corbin Powell doesn't quite get to concept. It was a one and done for her; not so much for him. They don't even like each other all that much...or at all, if they're being honest. Yet once they're in bed, niceties don't matter all that much. Corbin wants to be with her again, but Palmer wants anything but that. And then something unthinkable happens and while those around him try to provide Corbin with what he needs, it's only Palmer who seems able to do so. After all, she knows all too well what he's feeling. These two weren't supposed to mean anything to each other...until they start falling out of hate and then tumble all the way into love.

I adored Corbin and Palmer's story! Corbin may have initially come off as the guy who didn't have a serious bone in his body, but one of the best things about this book was the fact that we finally get to know him on a much deeper level. He needed someone like Palmer to give him direction and she, in turn, was able to see him in a better light. These two had certain notions about one another, and those notions were not necessarily all that misconceived either. They grew as individuals while their relationship evolved into more, and all throughout, they entertained the heck out of me, but then I wasn't all that surprised considering that's par for the course as far as this Oh Tequila series of C.A. Harms's was concerned. Make sure to check out the five-starred fab read that is Just One Kiss. ♥

Just One Kiss (book four) - stars - My Review (posted above)

Purchase Just One Kiss on Amazon.