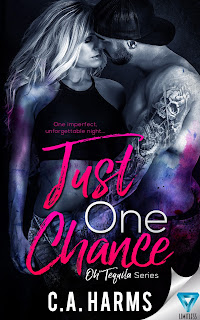 C.A. Harms's recently released Oh Tequila series starter, which falls under the new adult (NA) romance category, started things off quite splendidly with Just One Chance. Originally released as a novella under the title Oh Tequila and as a part of the multi-authored Beer Goggles series, this lighthearted romance is all about preconceived notions, family love and obligations, the importance of friendship, and how love comes your way when you think you don't want it but may actually need. We're introduced to a host of memorable personalities that I certainly wouldn't mind getting to know better as the series moves forward (but more about them later on), but it's the main characters, Xavier Stone and Morgan (whose last name I don't recall being mentioned) that owned this story.

Morgan isn't your typical college student. She's living with her best friend while still making sure that she's there for her family, knowing full well just how much her father works and how dedicated her mother is to Morgan's younger brother Toby who suffers from cerebral palsy. She doesn't have time for much else outside of school and work, but her best friend wants her to take a night off and have some fun--which leads to a frat party, which, in turn, results in one unforgettable hook-up with Xavier. But as strong as a connection as they may have, Morgan doesn't quite believe that Xavier is anything more than privileged frat boy. Tequila may have had a hand in getting them together, but Xavier wants to prove to Morgan that he wants so much more, if only she'd give him a chance.

What wasn't to like about this novel?! Morgan and Xavier were fantastic main characters, equally intriguing and enticing. She was a young woman with a lot weighing on her, but unlike a lot of other heroines, she's chosen to take on the responsibility instead of it being pushed on her. On the other hand, he wasn't the cookie cutter frat guy who partied as if there was no tomorrow. They both had a love for family and chose to surround themselves with a strong support system by way of their closest friends. It's those very same friends who brought in a lot of the humor in this story, but they also happened to carry with them tidbits of wisdom that Morgan and Xavier needed from time to time. I've got fingers and toes totally crossed that both their sets of friends get their own stories told.

Aside from the love story between Xavier and Morgan and the camaraderie among friends, my two other favorite things about this book were Toby and Marcus, Morgan's younger brother and best friend, respectively. There was no denying just how loved Toby was by his parents, his sister, and Marcus, but Xavier's love and affection for him had me teary-eyed because you could feel the sincerity and how what he was doing was for Toby and not for Morgan. Then there was Marcus who loved the family that claimed him as one of their own, and while I know I mentioned the whole thing about the friends of our main couple to find their way to happily-ever-afters of their own, Marcus deserves special mention. Overall, Just One Chance more than satisfied, and I'm giving this five stars. ♥

Purchase Just One Chance on Amazon.