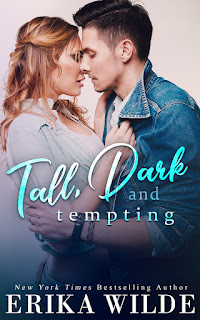 
Tall, Dark & Tempting is the third and final book in the Tall, Dark & Sexy series from bestselling author Erika Wilde, and it features the last of the Stone brothers and his lifelong best friend. Dylan Stone and Serena Fields have been friends for as long as they've been alive, and it's a friendship that started even before they were born, thanks to their mothers have been the best of friends as well. Nowadays, Dylan is the one that Serena goes to at the end of each crappy date. She wants the fairy tale, and he knows she deserves to have it, but even as those around them encourage him to pursue something more with her, Dylan also believes that he isn't her Prince Charming. She needs her happily-ever-after, and he's still someone who simply wants non-awkward morning-afters. But then they cross the line neither of them thought they'd ever cross, and everything changes for them...and not for the better.

I really liked the first two books in the series; this last one, however, wasn't my favorite, and the blame falls solely on Dylan. Sorry to say but I wasn't a fan of this particular Stone brother. I didn't quite believe that he was as clueless as he was regarding Serena's feelings for him. His treatment of her, as well, after they first slept together was rather callous, making her feel more like some cheap hook-up rather than the one woman other than his mother that he would do almost anything for. So yeah, he may have gotten on my bad side. Sure, he made up for his abhorrent behavior later on, and his grand gesture was exactly what Serena needed and deserved, but even that part had me raising an eyebrow because of the turn of events, which I can't get into (spoilers!). I did like Serena, Wilde's writing was great, and the series as a whole was a treat, so four stars go to Tall, Dark & Tempting. ♥

Read my reviews for the Tall, Dark & Sexy series: