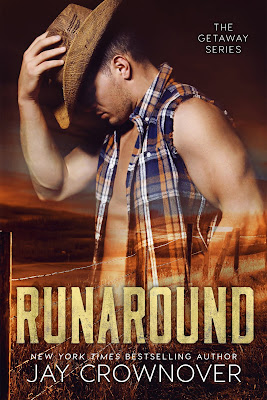 About Runaround
Can two people perpetually moving in opposite directions ever end up in the same place? Or will love just keep giving them the runaround?

Webb Bryant is intimately acquainted with every type of trouble there is. Trouble is all he’s ever known and the only constant in his life.

Webb’s a man constantly on the move. He’s a drifter. A wanderer. He bolts from one bad choice to the next, never able to put enough distance between himself and the ghosts from his past. He lives hard and fast, until everything comes to a screeching halt the moment he lays eyes on Tennyson McKenna. The stunning woman appeared out of nowhere to save the day, and Webb’s been unable to forget her. The leggy, blonde forest ranger might very well be the one person in the world important enough to finally keep him in one place. Only, Ten isn’t impressed by Webb’s knack for finding trouble. And no matter how hard he tries to shake it, he can’t escape his bad habit of falling into the deep end of questionable decisions. When his newest brush with trouble gets Webb in way over his head, Ten jumps after him into the dangerous waters. It’s possible they’re going to sink so fast they both might drown.

Tennyson McKenna makes it a point to be diligently cautious in all aspects of her life. She learned the hard way that leading with your heart instead of your head gets you nowhere.

Ten’s a woman stuck in a frustrating rut. After a string of failed relationships lands her back home, a pit stop to mend her broken heart becomes a hole she’s lost the will to dig herself out of. Coasting through her days was easy until Webb Bryant crash-landed in her path, complete with bullets, blood, and a grin far too charming for his own good. Webb is anything but safe and predictable. He’s everything Ten swore she would never gamble on again, but it’s impossible to ignore the way trouble follows him around like a shadow. And every single time Ten pushes Webb away, she finds herself chasing after him before he’s gone for good. When Webb’s past finally catches up to him, Ten has to decide if she’s brave enough to put her heart on the line for a man who might be gone tomorrow. 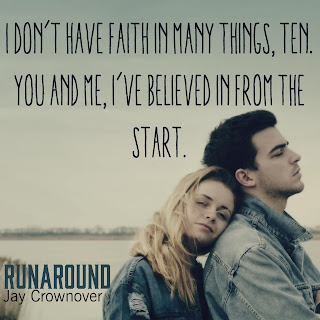 Read my five-plus-starred review of Runaround.

Find the Getaway series on Goodreads. 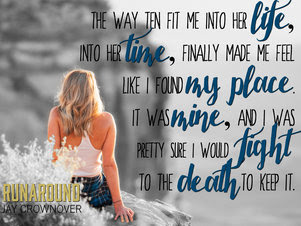 An Excerpt from Runaround
Tennyson
The first time I laid eyes on Webb Bryant he was frighteningly pale from blood loss and nearly delirious from a raging fever. He’d been sporting a hole in his shoulder from a bullet wound and was terrified his brother was dead somewhere in the vast Wyoming wilderness. It was my job to protect and patrol, one I focused on diligently, but Webb was admittedly distracting. I thought he was going to pass out at my feet, a city boy in way over his head. He didn’t. He never wavered or stumbled in the unfamiliar terrain and unknown situation…not once. He’d impressed me with his resilience and his determination to find out what had happened to his older brother. He’d also caught my attention with those burning blue eyes and shock of blond hair, which gave the misleading impression that the man had a single angelic quality about him. Every long, lean line of Webb Bryant oozed playful mischief and bled the promise of wicked things done in the dark…or during the bright light of day. He didn’t seem like the shy type. Even injured and out of his mind with frantic worry for his older sibling, he was the most charming, most flirtatious man I’d ever met. He sent every defense mechanism I had into overdrive, and there wasn’t a second that slid by where I didn’t remind myself he was not my type in the slightest. Besides, once the Warners and I had both the Bryant brothers straightened out, I figured I wouldn’t have to dodge Webb’s advances ever again. He would ramble on to his next adventure and be out of sight and mind.

I breathed a sigh of relief when he went away. He was too tempting. It was too enticing to give in to every single promise made by his easy smile and glinting eyes. Webb was several years younger than me, a man who was obviously lost and still trying to figure out who he wanted to be when he finally grew up. I was a woman who knew exactly who she was and who she could never be. I was never the type to chase after the bad boys, the wanderers, the reckless. No, I fell for the steadfast, the sturdy, and the solid. I gave my heart to the kind of men who held the world up and buffered everyone around them from the raging storm.

I handed my heart to the oldest Warner brother, Cyrus, when we were just kids. Coming to terms with the fact the stoic and serious cowboy would never feel about me the way I felt about him had been one of the hardest things I’d ever had to do. We shared similar dreams, knowing our lives were so much bigger than the ranches that had our family’s bloodlines entrenched in the soil. We both wanted more than Wyoming, and for a long time, I honestly believed we were on the road out of our tiny town together. It didn’t happen that way. Sure, we both got out in our own time and in our own way, but we both ended up back where we started. Cy was taking his return home in stride. He was far less resentful about his homecoming than I was. In fact, the wedding Webb was dragged out of two short days ago was Cy’s.

I thought it was going to be hard, damn near impossible, to watch the man I’d openly loved from afar for most of my life promise his forever to someone else. It wasn’t nearly as bad as I envisioned. Mostly because Cy was stupid happy with his fiery city girl. He’d never been that happy with me, before we left or when we both admitted defeat and came back home. He’d never loved anyone like he loved his Leo, so the sting of watching him put a ring on someone else’s finger was minimal.

I would gouge my eyes out with a rusty spoon before admitting to anyone, especially myself, that since the start of the wedding most of my attention had been on Webb instead of the happy couple. To my surprise, my heart didn’t feel nearly as trampled as I thought it would. It was too busy stupidly racing over the man I believed I wouldn’t see again and knew I should keep my distance from.

The blond man with a penchant for trouble hadn’t stayed gone like I predicted. Nope. He’d shown up right when Cy needed help on the ranch and offered to stick around. Webb claimed he wanted to learn a new skill, seemed he’d taken a shine to the rough way of life in the Wyoming backcountry and wanted to play cowboy for a while. Cy couldn’t say no, and as badly as I wanted to, I couldn’t stay away. I was caught in an endless game of cat and mouse, and some days I wasn’t sure if I was the predator or the prey. I tracked Webb out of the corner of my eye for months. I expected him to up his game and try to lure me to bed, knowing the wedding was going to lower my defenses. Never in a million years would I have predicted he was going to be led away from the festivities in handcuffs. 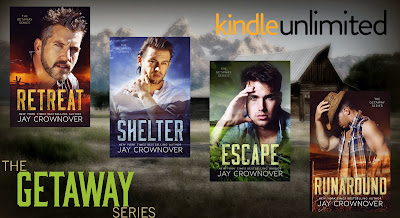 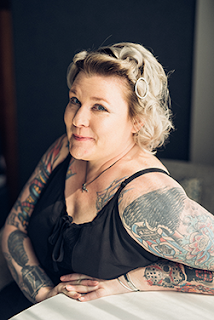 Jay Crownover is the International and multiple New York Times and USA Today bestselling author of the Marked Men series, The Saints of Denver series, The Point, and Breaking Point series. Her books can be found translated in many different languages all around the world. She is a tattooed, crazy haired Colorado native who lives at the base of the Rockies with her awesome dogs. This is where she can frequently be found enjoying a cold beer and Taco Tuesdays, as well as live music and terrible TV shows. Jay is a self-declared music snob and outspoken book lover who is always looking for her next adventure, between the pages and on the road.

For more on Jay and her books, visit www.jaycrownover.com.