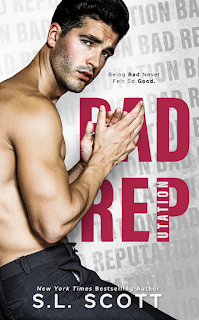 A second-chance romance AND a royal love story?! I must have snuck onto Santa's nice list by the skin of my teeth--any rumors about my naughtiness are exaggerated...or maybe not...depends on the rumors--because dear Mr. Claus seems to have an elf in the form of bestselling author S.L. Scott and I have reaped the rewards via her latest release, Bad Reputation. This had everything I could have wished for and I'm glad Santa (and S.L. Scott) were listening! This also happens to be standalone (although it's also a spin-off of sorts since Hutton Everest--quick FYI: the original title for this was supposed to be Hutton!--is the brother of Ethan Everest, whose own book is Everest), so yay for those of you out there who currently don't have the time to jump into a series or dislike evil cliffhangers.

Thirty-one-year-old Hutton Everest has everything a man could want: he has millions, brothers he would do anything for, and women willing to go to bed with him whenever and wherever. Then he meets Ally Edwards and what starts off as nothing more than a casual affair has Hutton wishing he could have any string attached to what they share. All they get are a few months before Ally walks away, but Hutton isn't willing to give up just like that. When he finds her again, it becomes all too clear why she felt she couldn't be with someone like him--not because he wasn't deserving but because her life had already been planned out. You see, Ally is none other than Arabelle Allyson Edwards Sutcliffe, honest-to-goodness royal princess and next in line to rule Brudenbourg. She's engaged to be married, but if Hutton has anything to say about it, it'll be him the next Queen Sutcliffe ends up saying "I do" to.

Hutton and Ally's story isn't your typical royal romance slash love story about second chances, and I love when and author is able to add unique enough touches to their tale, allowing it stand apart from a crowded field. Another thing I adored about this book was that it wasn't anything like Ethan Everest and Singer Davis's story, which was one I was quite enamored when it was released exactly a year ago today. Hutton and Ally faced a set of extraordinary circumstances, but then what else would you expect from an extraordinary love story like theirs? Bad Reputation easily snags five stars; now I can't wait to see who among the side characters gets their turn next! ♥