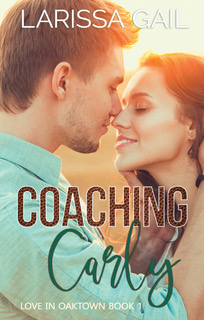 Coaching Carly is the first in the Love in Oaktown series and the debut release from Larissa Gail. This series starter was a story about second chances--for former professional football player turned high school football coach Gage Wilson to be the best father he could be to he fifteen-year-old son, Jonathan, and for algebra teacher Carly Owens to start over and be free of her abusive ex-husband. This is a contemporary romance read with a teeny, tiny bit of angst thrown into the mix as well as a pinch of suspense in the form of Carly being in hiding from her ex-husband.

Carly Owens and Gage Wilson are both new members of Oaktown High School's faculty. There's excitement over Gage's decision to take on the job to be the school's football coach after a successful career in the professional league, and while she's drawn to the man, Carly doesn't desire to draw any attention to her, not when she's trying to keep her whereabouts a secret from her ex-husband. But when these two decide to finally take a chance on their attraction and connection, could it be the start of something spectacular or will they fumble and quickly end?

This book had a familiar story line but it did hold some promise, and I like discovering new authors by way of their debut novels. As far as the writing itself, there were moments where it almost felt as if there was skip here and there, like something was supposed to happen but it simply wasn't made part of the final cut. The connection was also a bit iffy, wherein sometimes it's there, but sometimes not so much. I do believe, though, that Gail has the tools to put out an even better story; I'll be looking out for the next book in this series. 3.5 stars for Catching Carly. ♥