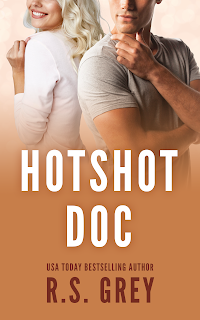 It's been a while since I last read something from bestselling author R.S. Grey (seriously, what's up with that mental lapse?!), and my re-introduction to her writing couldn't have gone any better! Hotshot Doc is her brand-new standalone and this smartly written romantic comedy had me smirking and smiling as well as swooning and snickering. This was a very pointed reminder of why I had fallen in love with Grey's writing in the first place and that I needed to get my act together and do some major catching up with as far as all the books that I had yet to read was concerned. If you've never read anything by this author before (?!), this is as good a place as any to do so!

Bailey Jennings is--dare she say--fantastic at her job as a surgical assistant, so when Dr. Lopez is set to retire, finding another surgeon to work with shouldn't be too difficult. Right? But when three other specialists at the practice inform her that they're already happy with the staffs they have assembled, Bailey is left with no option...save for one--Dr. Matthew Russell. The man's reputation precedes him, with no one able to deny how gifted of a surgeon he was; nor could anyone deny he was just as gifted in making those who worked with him in the operating room quake with fear with a look. Matt and Bailey think they're ill suited for each other, but the fact remains: he needs a surgical assistant and she needs a surgeon to assist. Soon enough, they'll want one another...but will they admit it?

One word: tension. These two main characters had that delicious kind of tension that promised a whole lot of, for lack of a better word, something-something. Bailey and Matt had their differences, but they were so well matched, pushing each other to be better than they already were and to not be afraid to expose their weaknesses because they know had that other person--someone they weren't related to--who believed they were worth more than their perceived failings. Now that may make this book sound a wee bit heavier than it actually was, but there was also a certain degree of seriousness to it, especially given what led Bailey to become her younger sister's legal guardian and why Matt had no personal life to speak of. Let me reassure you that Hotshot Doc is a  lighthearted read, and when I say that I mean that it did, indeed, make my heart feel lighter while reading it. This gets five stars. ♥