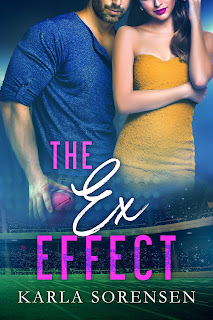 I went into The Ex Effect with high expectations, due in large part to the fact that I loved The Bombshell Effect, and Karla Sorensen has left me impressed yet again. Prior to these two novels--which part of the same untitled series (if it does have a title, please feel free to let me know via the comments area!)--I had read two other Sorensen books, one of which was co-written, and liked those well enough, but it wasn't until The Bombshell Effect that I truly sat up and took notice. And hooray for keeping the streak alive  because this sports romance with a hint of taboo to it--the male main character is the ex-fiancé of the female main character's older sister--was a stellar read.

Coming out of retirement to help a football team get their winning form is the sort of news that would make any publicist's job easy-peasy. When the player happens to be defensive end Matthew Hawkins, however, being the publicist for the Washington Wolves becomes a wee bit more complicated for Ava Baker. After all, Matthew wasn't just the guy she had a massive crush on years ago; he also happened to be once engaged to Ava's sister--the same sister who cheated on him, thus ending things between them. Even after all these years, however, Ava is still drawn to Matthew, and it appears that the attraction this time around is very much mutual. But when they decide to pursue a relationship, will their past connection spell trouble not just for Ava professionally but personally as well?

I'm happy to say that this book can, indeed, be read as a standalone, although I'm going to highly recommend you check out The Bombshell Effect, too, because that was one heck of a fun read. I know there are some readers who don't like the fact that Matthew was once involved in a long-term relationship with Ava's sister. I can totally understand why since, at its simplest, it does make for awkward family gatherings. I had no issues with that, especially given that he was, for all intents and purposes, a good man. Would you really be willing to sacrifice your own happiness and shot at being with the person you were in love with simply because he was your sister's ex? But hey, what clicks with some may not click with others, and I can appreciate that. What I will say, however, is that readers do give The Ex Effect a whirl and judge it based on their reading experience. I'm giving this novel five stars. ♥

Purchase The Ex Effect on Amazon.