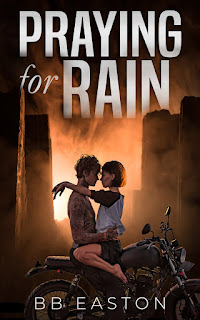 BB Easton made quite a name for herself when she released her well-received sexual memoir of sorts, 44 Chapters About 4 Men, about three years ago, following that up with lengthier full-length versions for each of the aforementioned four men she had been with in her life via the popular 44 Chapters series from 2017 and 2018. Now, she's ventured into fictional writing, and boy, oh boy, has she made her presence known with Praying for Rain, the first in a series by the same name. I've read quite a few apocalyptic and post-apocalyptic novels, but Easton's new series starter may well be my first pre-apocalyptic romance read ever.

Time is running out and in a small town like Franklin Springs, Georgia, desperation spills out of every nook and cranny and seeps from every pore of the townsfolk. Nineteen-year-old Rainbow Williams is actually looking forward to the apocalypse that's been predicted to hit on the 23rd of April. It'll mean the end of the nightmares that plague her while she sleeps and those that she's faced with once she wakes. Rain's accepted her fate; Wes Parker, not so much. She calls him a lifer, but maybe the twenty-two-year-old is a survivalist. He knows what it's like to be forced to endure and get past life's challenges, and this apocalypse is merely another thing to add to his list. The question is: will Wes and Rain be able to survive each other?

I've tried my very best not to give anything away, but note that this is part of a trilogy, a fact that I did NOT know going into it. The ending isn't your typical cliffhanger, however, so there's no frustration on my end due to the that; My frustration comes from that sneak peek into book two! Argh! A teeny, tiny part of me may have actually wished that this book ended where it did as a standalone, but then a larger part of me loved this world that the author had created that I needed more from it. Rain was a kickass heroine who also had this vulnerable side to her that made it easy for me to connect with. Then there was Wes who was all badass but then he also had cracks in that armor of his, and the two of them became necessary to each other. I loved the originality and writing that BB Easton had to offer in Praying for Rain. This gets five stars. ♥

Purchase Praying for Rain on Amazon.