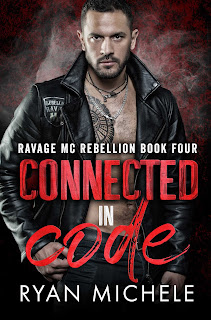 The fourth book in the Ravage MC Rebellion series is finally here, and its easily become my current favorite in the series. Connected in Code is the story of twenty-eight-year-old Hayden Winchester who is forced to hack her way into a system and gather information. It may sound simple enough--after all, Hayden is a whiz at what she does, but the pressure is on for her not to get caught or screw up. With her best friend's life at stake, Hayden needs to get in, gather her intel, and get out without being detected, but while she may be good at getting through firewalls, Wrong Way is a very real threat to the walls she's built around her. The fact that he also happens to be part of the Ravage Motorcycle Club's Rebellion chapter complicates things beyond belief. He's able to see her beyond her persona, and she glimpses Reid Maxwell--the man behind the road name. The more entwined Hayden and Wrong Way become, the greater the stakes are. Hayden desperately needs to find a way out of her predicament, but she knows painfully well that there's no escaping her circumstances or the consequences of her actions from all sides.

He may carry the moniker of "Wrong Way" but he was clearly the right person for Hayden. I loved these two together, and while it was obvious from the get-go that there were going to be hurdles for them to get over, I was rooting for them to get to that happily-ever-after even if they'd have to fight tooth and nail for it. As always, Ryan Michele mixes in her romance with an edge of suspense to it, making this an intense read that I was hooked on from start to finish. There's a reason why she's one of my go-to authors when it comes to the MC romance sub-genre. The woman knows how to hook her readers with tension-filled tales worth reading. Both Hayden and Wrong Way were wary of other people getting to know them, more so Hayden than Wrong Way, but as the layers were peeled back, the more fascinating these two became. It would have been difficult for me not to be as emotionally invested as I was with the two main characters and their story, and it had definitely had the lighthearted parts balanced out with the far darker elements. Connected in Code was a truly fab five-starred read. ♥