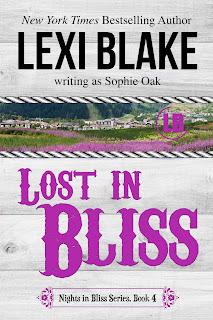 Lost in Bliss is a second-chance romance set in the fictional town of Bliss, Colorado, and it's the fourth novel in Lexi Blake's Nights in Bliss series. Originally written a few years back under the author's pseudonym of Sophie Oak, this re-released edition has a former FBI agent hiding in plain sight for five years and the two men who have made it their mission to find her and the psychopath intent on harming her again. After getting fired from a job she loved and then summarily taken and tortured by the very serial killer she was profiling, Laura Niles cut her losses, believing she had nothing left in Washington DC, not when the two men she thought would have her back stabbed her there with their lack of belief in her capabilities instead. She's found safety and security within the community of Bliss, so when Rafe Kincaid and Cameron Briggs suddenly make an appearance, Laura isn't sure what to make of it. They inform her of the return of the Marquis de Sade--the same killer that abducted Laura five years ago. It looks like both Laura's worst nightmare and the men of her dreams have their sights set on the one that got away.

As always, Lexi Blake another well-written three-sided romance from the quirky town of Bliss. Laura should be a familiar character to those who are fans of the series, having made appearances prior to this fourth novel. I love how Laura has this strength about her, proving that she isn't "just" a survivor but someone who has reclaimed her life and is making the most of each and every day. While it goes without saying that she loved Rafe and Cam equally, I must say that I was more of a fan of Cam's than Rafe's, and it had a lot to do with how either man handled things. Now, Rafe did manage to win me over by the time we got to the end--especially after he made a couple of decisions that had me thinking "it's about time!"--and I finally believed he was worthy of Laura. I liked the romance aspect of the book, but it was the mystery suspense part that truly had me sitting up and paying attention. Lexi Blake knows how to keep me on my toes with her writing, and I changed my mind a couple of times as to who the villain was. I enjoyed Lost in Bliss, which gets four stars, and I can't wait to read more from Bliss, CO! ♥