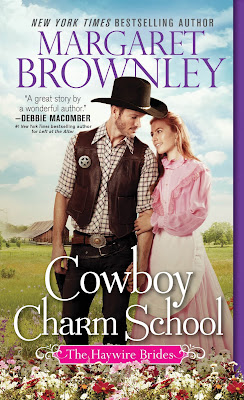 Texas Ranger Brett Tucker hates to break up a wedding, but the groom—notorious criminal Frank Foster—is a danger to any woman. So he busts into the church, guns blazing...only to find he has the wrong man.

Bride-to-be Kate Denver is appalled by her fiancé’s over-the-top reaction to the innocent mistake and calls off the wedding—for good. Guilt-ridden, Brett’s desperate to get them back on track. But the more time he spends with Kate, the harder he falls…and the more he yearns to prove that he’s her true match in every way.

An Excerpt from Cowboy Charm School
Brett rubbed his forehead. “So how do you plan to propose?”
Foster frowned. “How?”
“Yes. Show me.” He meant for Foster to rehearse the words out loud. Instead, Foster took it one step further by dropping to his knees by Brett’s chair.

“Kate,” Foster began without preamble. ‘I think it’s time that you and me got…you know…hitched.”
Brett drew back, appalled. “Great thunder! What kind of proposal is that?”
The corners of Foster’s mouth drooped. “What do you mean?”
“What do I mean? A proposal isn’t like a cork. You don’t just pop it out. This is the most important question a woman will ever be asked. You must make it special. Memorable.” He motioned to Frank’s chair. “Get up.”
Brett waited for Foster to return to his chair before dropping to his own knees. “First you take her hand in yours.” He took hold of Foster’s roughened hand and suddenly his mind started playing tricks on him. He was back at the barn dance, Kate’s small hand in his. Soft as silk it felt. Soft as a rose petal. Shaken by the flushed feeling that came over him, he stared at the poor substitute in his hand. What in blazes was the matter with him?
Foster gave an impatient moue. “Well, get on with it.”
“All right, don’t rush me,” Brett muttered. “Proposals can’t be rushed.” He gazed up at Foster, but the eyes that came to mind were her eyes, so blue that even the sky paled in comparison. And he felt himself sinking into the imagined depths.

Aware he was still kneeling and holding Frank’s hand in a restaurant, no less, he got down to business. “Now, this is how a man proposes.” He cleared his throat. “Katherine Anne Denver…. It’s important to use her full name. That shows that what you’re about to say is special. You know what I mean?”

Foster yanked his hand away.

“You have no right saying those things about Katie.”

Brett rolled his eyes. “I’m giving you examples of what a marriage proposal should sound like.”
“I don’t want you using Kate as an example. Use someone else.”

“Blast it!” He grabbed hold of Foster’s hand. “How ‘bout this? I love the way the hair curls out of your ears. There! Are you satisfied?”

Still on bended knee, Brett forced himself to calm down. “Okay, now pay attention. This is important. After you tell her all the things you love about her, you could say something like…I want to spend the rest of my life making you as happy as you make me.”

Foster stared down at him but said nothing and Brett continued. “Okay now, here comes the big moment.” He tightened his hold on Kate’s…uh… Foster’s hand. “Kate, you would make me the happiest man alive if you’d say you’ll marry me.”
Brett would have said more but Foster snatched his hand away with a frown. “You make it sound like you…you really mean what you said.”
Brett blinked. “What?”
“You made it sound like a real proposal. Like you really want Kate to marry you. Like…like you love her or something.”
Realizing with a sense of horror that he could very well be guilty as charged, Brett sat back on his heels. Shaken, his mind scrambled. He loved Kate? That can’t be true. Sure, he was attracted to her. Maybe even infatuated with her. But that didn’t mean he was in love with her. At least not in the full sense of the word.
Since Foster was staring at him all suspicious-like, Brett fought to pull himself together. “I’m trying to show you the proper way to propose,” he blurted. “You’re supposed to say yes. Yes, I’ll marry you.”
“All right, dang-it.” The volume of Foster’s voice would have made an auctioneer proud.  “Yes, I’ll marry you!”
The sudden silence that filled the dining room gave Brett a bad feeling. Still on his knees, he glanced over his shoulder only to have his worse fear confirmed. All heads, including that of Kate’s friend Connie, were turned to their table, and there he was, still on his knees, holding Foster’s hand in his own.

About Margaret Brownley
New York Times bestselling author author Margaret Brownley has penned more than forty-five novels and novellas. Her books have won numerous awards, including Readers’ Choice and Award of Excellence. She’s a two-time Romance Writers of America RITA® finalist and has written for a TV soap. She is currently working on a new series. Not bad for someone who flunked eighth- grade English. Just don’t ask her to diagram a sentence. 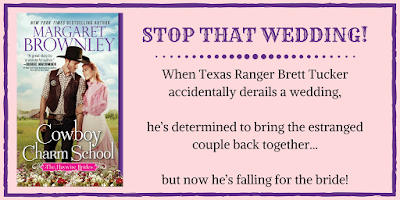