Review: Once Upon a Real Good Time by Lauren Blakely (Heartbreakers #1) 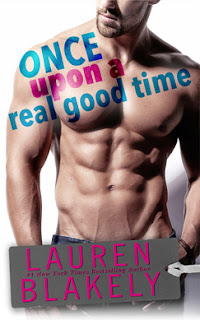 
When I open my eyes, a million thoughts form on my tongue, but I don't say a word. Our eyes say everything when our gazes lock.

She has to be able to tell from how I look at her. From the way I kiss her cheek, the corner of her lips, her eyelids.

From how I breathe her name reverently. “Mackenzie.”

She has to know I'm falling in love with her.

Well, hello there, Campbell Mason Evans! Rock star romances rely heavily on the kind of rock star the main character is, and well, Campbell is in a class all his own. He's also turned out to be one of my all-time favorite Lauren Blakely heroes, and rightly so, what with his being a gifted singer and musician, an all-around epic specimen of a hot guy, and oh my, he's a single dad who adores his teenage daughter whom he's been raising on his own since she was only two. Can I get an "amen"? But don't think that Campbell is the only thing that Once Upon a Real Good Time--the first in Blakely's all-new the Heartbreakers trilogy--has going for it. Add in one hell of a kickass heroine who also happens to be a trivia whiz and a kickass cook AND a single mom to a teen son and this was a coupling that was destined from the get-go. Oh, and did I forget to mention that the story is fab and a series starter AND written by none other than Lauren Blakely? Sexy times, sassy exchanges, and a whole lot of romance are in the offing PLUS a whole bunch of characters that readers like me are going to want to know a heck of a lot better.

Once Upon a Real Good Time is all about two single parents who share a connection that's far more difficult to ignore than either one thought possible. Thirty-five-year-old Campbell Evans likes his life the way it is. He continues to play the kind of music he likes, takes care of his fourteen-year-old baking goddess of a daughter Samantha the way she deserves, and passes on his musical knowledge to talented young musicians. When he spots an adorable and vivacious trivia contestant at one of the bars he and his band play at, his curiosity is piqued and his awareness pinged. Mackenzie is a sponge for knowledge and lives for trivia nights with one of her besties, but her priority is and always will be her thirteen-year-old violin virtuoso Kyle. Even when her son's father--and one of her closest friends--encourages her to go and let loose, Mackenzie hesitates. But one night with Campbell has her craving for more. And then she meets her son's new music tutor--Mason Hart, former rock star from a band composed of three brothers known as the Heartbreakers. Could this turn of events lead to his and her hearts breaking instead?

This book was...GAH! You know all those rock star book boyfriends readers gush over? Well, Campbell Evans blows them out of the water even if he is, technically, a FORMER rock star. The guy exudes this confidence but he is by no means cocky. He doesn't downplay his musical talents but he also acknowledges that he's good enough that he passes on what he knows to kids who share the same gift. And to be paired with someone like Mackenzie? Jeez but how adorable AND smoking-hot these two were! There's sweet but there's also sexy, and there's a whole lot of amazing storytelling in between. I also happened to like the supporting characters who were part of the story, with special mentions going to their respective teenagers. With a healthy dose of humor and lots of heart, this series starter was a change of pace from the author's previous release, which had more angst. I love that Lauren Blakely is able to keep things interesting for her fans and readers, and if the rest of her new Heartbreakers series is as fab and funny as this opening salvo, the next few weeks will be great! Five-plus stars for Once Upon a Real Good Time. ♥

Purchase Once Upon a Real Good Time on Amazon | B&N | iBooks | Kobo.