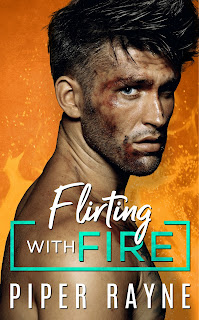 I love M&Ms—the peanut kind, in particular, for those of you out there wondering (although I’m pretty sure no one really cares at the moment). They’re my favorite go-to quick fix when I need something in my tummy to keep it occupied if I’m too busy with work or life in general to go and scrounge up healthier fare. What’s the point of me bringing up chocolatey goodness in a book review? Well, I have a new favorite kind M&M: the Mauro and Maddie kind, also known as Mauro Bianco and Madison Kelly, the main characters from the brand-new Piper Rayne book, Flirting with Fire, the first in their Blue Collar Brothers series featuring the Bianco brothers—Mauro, Cristian, and Luca, a firefighter, police officer, and paramedic, respectively—who were introduced as a group in the authors’ previous release, Happy Hour, the final book in the Charity Case series.

Madison Kelly has always been quiet, but don’t mistake that for her being reserved or a people pleaser. That’s the mistake Mauro Bianco makes when he takes Maddie on the date her friend paid for during a bachelor auction. Instead of hitting things off and tempted by Mauro, Maddie is more tempted to hit him over the head with something. The guy who gave her her first kiss as a teenager—and then promptly forgot all about it the next day—is every bit as delicious looking as ever, but unlike Mauro, Maddie remembers both the thrill of that first kiss and the heartache when he clearly didn’t recall what they shared that night. When Mauro realizes that his impression of Maddie during their date was wrong, he’s intent on discovering the real Madison Kelly, but convincing her to take another shot at him could be just as difficult as putting out real life fires.

I adored these two, and Mauro’s brothers and Maddie’s friends were that great combo of supporting characters while also making readers curious as to what awaits them as the next two books are published. Yes, I seriously wanted to smack Mauro for forgetting about the kiss he shared with Maddie, and how he kinda-sorta-maybe-totally wrecked that first date of theirs, but the man knows how to win a woman over, and he did so quite nicely with both Maddie and me. Aside from the romance, there’s a hint of mystery and suspense in this series starter, something I totally didn’t see coming. I don’t want to give too much of it away—and this does end in somewhat of a cliffhanger!—but the series arc is an extra reason for me to keep an eye out for Cristian’s and Luca’s books over the next couple or so months. Flirting with Fire was a really fab five-star start! ♥