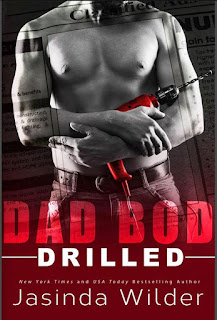 The hot forty-somethings that comprise Dad Bod Construction are back, and just when you thought the series couldn’t get any hotter, bestselling author Jasinda Wilder kicks the heat index up a notch or ten with book two. Drilled is the story of forty-year-old fitness trainer Audra Donovan and forty-five-year-old carpenter and woodworker Franco Morrissey, neither of whom make a secret of their preference for hook-ups with whomever catches their fancies. So, one night and several orgasms shouldn’t mean that either of them expects more simply the sex was the hottest ever for either one of them or because they happen to know one another and their closest friends are together as a couple, right? Then why does it kinda-sorta-maybe hurt when Franco pulls a runner? Keeping things friendly rather than flirty sounds good, but staying away from each other doesn’t stop fanning the flames…it doesn’t stop them from falling in love either.

This book gets off to one hell of a sizzling start, and it makes two things quite clear: Audra and Franco have amazing sexual chemistry and they both suck in the what-happens-after part of a hook-up with each other. I seriously wanted to smack these two upside the head more than once because they spent so much time trying to pretend that what they shared was nothing more than lust rather than be mature adults and talk about it. There are reasons, of course, why they are the way they are, and I liked getting to know these two better as their story progressed. It was also fun having the rest of the gang around because we get to see where Imogen Irving and Jesse O’Neill are at in their relationship as well as see who the other Dad Bod guys—James Bod and Ryder (whose last name I don’t recall being mentioned but if it was, feel free to let me know!)—are going to be paired with. 4.5 stars go to Drilled and I can’t wait for more from this fab series. ♥