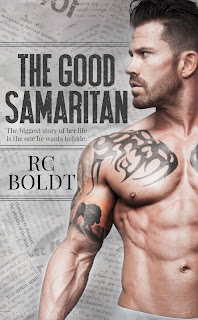 “I'm always better when you're with me.”

She has now way of knowing how much of an impact her words have.

She has no way of knowing that I feel the same.

Faith splays the fingers of her injured hand flat over the center of my chest, and I know, regardless of ow this ends, this woman has branded my heart.

There are feel-good stories that leave a smile on your face and there are tales that bring a tear to your eye; and then there are stories like The Good Samaritan. I’ve read all of RC Boldt’s previous novels. I’ve liked some and loved most, but her latest release—which is a standalone with loose ties to the author’s Out of series, a spin-off of her debut Teach Me series—is a cut above the rest. This was a story that, indeed, evoked emotions out of me, but it also gave me things to consider and ponder on. There was no escapism here, because as fictional as the tale of a newspaper reporter named Faith and a homeless and reluctant hero given the name of Jude, there were aspects that hearken to certain realities. Ultimately, however, this was a story of love and hope.

Twenty-six-year-old Faith Connors is a woman tasked to look into the spate of incidents involving a mysterious man about town known only as “the Good Samaritan”. He shows up in an unsuspecting fashion to offer his help in whatever manner necessary to those who may need it. His identity is unknown but he’s also become a familiar face to the few who refused to let his barriers stop them from trying to get closer. When Faith finds herself on the receiving end of the Good Samaritan’s assistance, she’s grateful, but knows she needs the scoop on him even as she finds herself distracted by a man known only as Jude. He’s quiet, barely saying much, especially about himself, so what’s his connection to the Good Samaritan and a man named Simon Sullivan?

This novel not only had a fantastic story to share, but it had one hell of a great cast of characters, each one bringing this bit of spark to make any already great tale a far more inspiring one. From main characters Faith and Jude to supporting ones like Father James and Pauline Donahue and even those who may seem like blips but have an impact on both Faith and Jude and the development of their story as a couple and as individuals. There’s even a familiar “face” that shows up, but I won’t say who and let that serve as an enticement for those of you who have yet to read this wonderful book. With themes of redemption and absolution as well as love and paying something good forward, The Good Samaritan is RC Boldt at her best and it gets five-plus stars. ♥