Review: Christmas with the Band by Michelle Hazen (Sex, Love, and Rock & Roll #3.5) 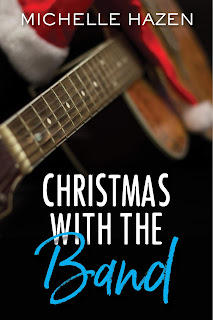 Michelle Hazen wraps up her Sex, Love, and Rock & Roll series with a holiday novella entitled Christmas with the Band. While I'm sure there are some people out there who must be thinking to themselves that it's only September and that's way too early for holiday anything, I happen to live in a country where the beginning of September kicks in the -ber months and chimes in the start of the holiday season. This series ender is touted as a "comic romp" but while it didn't exactly feel like that at least as far as I was concerned, it was a good read, one that had all the players present and accounted for and a tying of any and all loose ends with an understated happy ending for everyone. I highly recommend that the books be read in order for a more complete reading experience.

Jax and Ava are happy and in love, but while Jax is looking forward to celebrating Christmas with his band mates and their families, Ava is wary. She knows all too well that she isn't exactly Danny nor Jera's favorite person, especially not after the way certain things played out while Ava was on tour with the Red Letters. But Danny's and Jera's significant others--Kate and Jonah, respectively--try to lessen the tension as do the other guests. However, when things come to a boiling point between Ava and Jera, will the Christmas celebration end up becoming the final straw in Jax and Ava's relationship or could it be a turning point and hopefully, the start of something better?

I wasn't a huge fan of Ava's in Insatiable, and a lot of that had to do with the very reason Jera is as cold and distrustful of her. However, she finally and ultimately won me over by the end of this novella, and thankfully so because it did feel as if she was exactly what Jax needed. Theirs isn't what I'd call an absolute happily-ever-after, but where their story ends feels hopeful and after everything they've gone through, I'll take a happy-for-now (HFN) over an HEA. Seeing all three couples together in happier times made Christmas with the Band a four-starred read. ♥

Purchase Christmas with the Band on Amazon | B&N | iBooks | Kobo.