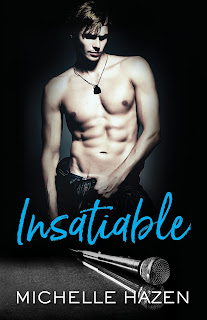 He's the bad boy lead singer of a band on the cusp of fame and fortune; she's the performer who hasn't just made a name for herself but created a brand of her own. At twenty-six, Jax Sterling and his best friends and band mates are only beginning to get a taste of what musical juggernaut AVA is basking in. But even as The Red Letters are making their name in the music industry, the bond that ties all three members begins to feel as if it's barely holding them together. Becoming involved with someone like Ava could provide him with the sort of committed relationship he never thought he'd be able to have with anyone outside of his friends, but Jax's own insecurities and fears have him believing he isn't in the same league as Ava and that she deserves better. When personal and professional obstacles begin to affect The Red Letters and Jax's own dark secret is threatening the tenuous relationship he's building with the young woman he's falling for, Ava's got her own share of darkness that she believed she's left behind. Both Jax and Ava find themselves on a cliff, but will they jump together or fall far apart?

I've been looking forward to reading Jax's story, mainly because of everything the guy went through in the first two books. He's certainly got his demons, but he also deserves the sort of happy life that his best friends and band mates are enjoying with their respective partners. It took me awhile to feel connected to Ava, however, so I wasn't as invested in their story as I would have wanted to be. She was this very successful musical megastar, but she had one hell of a chip on her shoulder and it felt as if there was a wall between her and me as the reader. I definitely wasn't a fan of her false accusation that Danny O'Neil had called her a "slut" and a "whore" either. I'm all for a woman standing up for herself in the face of a man belittling her, and Danny was clearly acting like an asshat, so it's not as if she didn't have something to throw his way without having to make issues up. So, the romance aspect between Jax and Ava wasn't my favorite in the series, but I did love the fact that this book wasn't just about the romance. Ultimately, Insatiable was about friendship and love and the resilience of both, and it receives four stars.  ♥