Review: Falling in Between by Stevie J. Cole 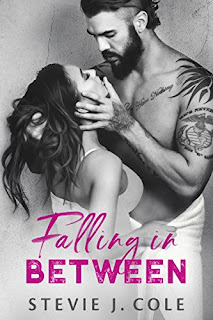 I've been fortunate enough to have enjoyed Stevie J. Cole's darker reads co-authored with LP Lovell as well as loving her lighter fare as a solo writer. With her latest release, Cole returns to the romantic comedy genre, and Falling in Between had a story that brought a smile to my face. With her marriage of ten years coming to an end, thirty-five-year-old Charlie Williams is dragged by her two best friends to Mexico in order to add a bit of oomph into what's become a really rather ho-hum life. A bit of alcohol and letting loose should do the trick, but Charlie never expected the missing "oomph" to come in the form of a one-night stand she can barely remember. Her partner in crime, however, remembers his evening with "Demi" extremely well. Six months pass and Charlie finds herself crossing paths once again with her hook-up from Mexico. Fate has her and twenty-nine-year-old Elijah Banks bumping into each other in New York, and they begin to go on dates. Somewhere between the initial romp and romance, Charlie falls for Elijah, but what can there be for them when she hasn't even told him her real name?

This was a lighthearted and fun-filled read, one that I enjoyed for the most part. I liked that Charlie was a few years older than Elijah, and that she was discovering the more passionate part of herself that was missing while she had been married to her ex-husband. I'm also glad that there wasn't a whole lot of unnecessary drama concerning said ex. Been there, done that in more books than I can count. These two are ably supported by Charlie's best friends, but for all intents and purposes, this book really is all about them and how they share a strong connection that starts out as sexual and then progresses into more as they get to know one another. There's a hint of angst with as far Elijah's back story is concerned, but other than that, this had a really rom-com feel to it. I enjoyed the romance as much as I did the banter that Charlie shared with her besties, with the latter eliciting a laugh or two from me. I did find it a bit of a stretch that Charlie waited until 95% or so of the book to come clean to Elijah about her name and the revelation itself was really rather anticlimactic. Still, Falling in Between resulted in one good four-star read. ♥

Purchase Falling in Between on Amazon.