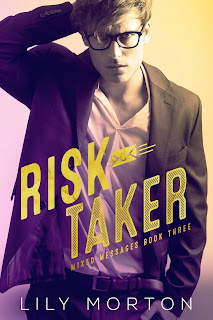 Make way for a new book to be added to my list of 2018 top reads because Risk Taker had me, hook, line, and sinker. The third in Lily Morton's Mixed Messages series, this was a friends-to-lovers slash stepbrother romance that I could totally get behind, and that's saying something considering the first trope is a personal favorite and the second one...well...not so much. Morton's combination of heartrending angst and lighthearted wit along with a slow burn romance that led to a myriad of emotions. This series has me adding this author to my go-to authors list. I was left impressed and itching for more from her, and I'll definitely be checking out her back list in the meantime.

Henry Ashworth and Ivo Robinson were teenagers when they first met, with Henry's father having married Ivo's mother. They became best friends and each other's strongest ally, and even when their plans to go to university together fell through and Henry went on to become a lawyer and Ivo an artist and photojournalist, the latter taking him to different countries and seeing the good, the bad, and the ugly, Henry was always going to be Ivo's home. Being apart for lengths of time has made it possible for them to pretend their feelings are anything more than brotherly and platonic. But when Ivo returns to London after getting injured while on assignment and is ordered to stay put for longer than usual, close quarters and constant presence finally force them to examine their emotions.

I'm one of those reviewers who notices even the tiniest flaws in a book. Maybe it's nitpicky of me or maybe it's just my editor side that zeroes in on such things. However, I'd be hard-pressed to immediately come up with one thing about this novel that didn't work or come off as iffy or had an egregious error or something--ANYTHING--about it that had me rolling my eyes. It's highly possible that I missed something, but in the here and now, I just can't name a single aspect of this book that I didn't like. Hell, let's be honest here: I loved this book! From the main characters to the supporting players and to the story to the writing, the third Mixed Messages novel ticked all my boxes. This wasn't necessarily a quick read, but I didn't even realize that a couple of hours had already passed by the time I was done. I was THAT into Risk Taker, which is why it's now one of my favorites for the year and gets five-plus stars. ♥