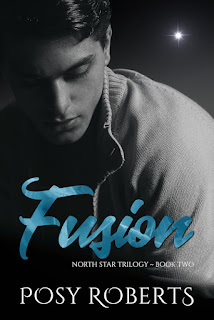 Two books in and Posy Roberts's North Star trilogy continues to click with me even after having read the series a few years ago. Picking up where Spark left off, fate has Hugo Thurson and Kevin Magnus finding their way back to one another, but life is far more complicated now that they're adults than when they were teenagers. As much as Kevin may love Hugo, he also happens to be very much in the closet, his bisexuality a secret to everyone around him. He knows that in order to ensure that the life has planned with Hugo moves forward, he's going to have to be straight--pun intended--about his being bi and his love for Hugo. But when his ex-wife Erin receives devastating news, Kevin puts all his plans on hold, knowing that his first concern should be for Erin and his children, Brooke and Finn. Reassuring Hugo that he does have a place in Kevin's life may not be easy, but Hugo may be in for a surprise.

I love how the characters in this trilogy have evolved over the span of two novels. The fact that the story also has its own share of twists and turns has allowed to be more noteworthy for the right reasons. The author started this series off with a second-chance romance, and with this second book, she's moved on to a hurt-comfort read while still retaining the same set of characters and the story arc involving how Hugo and Kevin will fuse their lives together after realizing that the spark between them never really died. (See what I did there? I'm totally patting myself on the shoulder for tying that to the titles of the first two books.) This one brings on the angst once again, which I liked because I have a thing for angst, but it's an even longer read than its predecessor, so be prepared to put in several hours of reading time. Still, Hugo and Kevin's story in Fusion will be worth it. This receives four stars. ♥

Read my reviews for the North Star series: