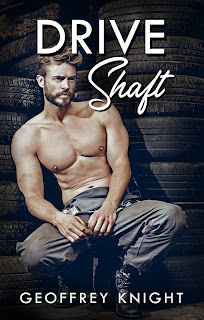 Note: A review copy was provided by the author via Vibrant Promotions.

Whoa. This book was SO not what was expecting it to be. Drive Shaft was like me getting into the passenger seat of the car thinking I was headed towards one destination only to realize halfway through that I was on journey that had me double checking my seat belt was locked in and grabbing on to the assist handle. This felt like it had two distinct parts, and it wasn't until after I had read the book and was prepping the promo post that was going to go with the review that I saw the blurb again and saw that this originally was two separate but consecutive novellas, Drive Shaft and Drive Shaft: Between a Rock and a Hard Place, neither of which I read in their original incarnations. The whole two-part feeling aside, Geoffrey Knight wrote a story that had me on the edge of my seat, pun intended.

When twenty-year-old Jensen Rivers leaves Texas on his Ducati, all he has his meager belongings and one destination: Clyde's Auto Repair & Body Shop in California. His new boss is an old guy with an equally aging black Labrador as his constant companion, but it's Jensen's co-worker who has him curious...and interested. Dean Hutchinson may only be a few years older than him, but Hutch never fails to take the opportunity to point out just how much better he was than the Texan newbie. He intends to prove that he's faster and more in control, taking every win he can by pushing past all boundaries, whether it be inside his precious car or inside the young man he can't seem to get away from. Can they work the lust out of their systems or could they be meant for the long haul?

While the first part of the book had that intriguing mix of kink and racing between Dean and Hutch where animosity and attraction mingled, the second part reminded me of Wacky Races and Cannonball Run but without the animation and knee-slapping humor. There was this intensity that was constant between Dean and Hutch, and it made for a really great connection with a whole lot of hot sex and hints of romance. The supporting characters were integral in pushing the story forward, even though the villains felt like caricatures at times. I thoroughly enjoyed the races and sex and hint of angst in the first chapters and the exciting and entertaining Reaper's Rally and trying to outwit and outsmart the villains in the latter half. Drive Shaft was a 4.5-starred highly compelling ride. ♥