Review: A Change of Pace by Freya Barker (Northern Lights #3) 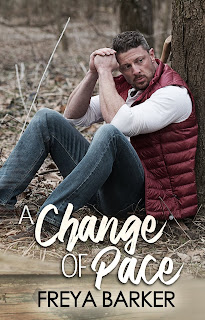 I'm not specific. There isn't just one thing I'm grateful for, and I don't think I'd be able to express my gratitude any better than just with those words. They come straight from the heart.

"You're welcome," she mumbles, sighing deeply, her breath against my skin.

Sleep comes easy after that.


It's been nearly a year since Freya Barker released the second novel in her Northern Lights series, but A Change of Pace, the third and newest book, was worth every single day of waiting. I think I've mentioned in my past reviews for Barker's novels how much of a fan I am of her main characters being in their forties, but it's a point that needs to be reiterated. You know the old adage "Life begins at forty"? Well, this author's stories show that life was already happening before her characters hit their forties but it can very well get more interesting past the big 4-0. I've read quite a few novels with characters of the same age group, but I'd be hard pressed to find one as much as I adored A Change of Pace or its predecessors. This series is Barker at her best and I hope there's more in the offing.

Forty-nine-year-old Newt Tobias makes the decision to move with his fourteen-year-old daughter Millie to the Canadian township of Carling. Leaving behind his job in the police department and the home they had would be worth it if it meant giving Millie that change of pace she needs--that they both need and deserve. He likes having a cottage by the lake and working with his hands and he hopes his daughter finds that spark that she once had. Newt, however, isn't quite sure what to think of forty-six-year-old therapist Frederique Marchand. She's a spitfire who doesn't hesitate to speak her mind, and when she and her four-legged sidekick named Boulder reach a part of Millie that Newt hasn't been able to for months--and that could very well make Freddy the godsend they needed.

From start to finish, there was something extraordinary about this latest Northern Lights novel. The combination of a father doing whatever it took in order to give the most important person in his life the peace of mind and happiness that she deserves and a woman making the most of her second chance at life was both touching and inspiring. Freya Barker doesn't try to give her readers sugary sweet romances--there's bite and grit to her words and the stories she shares, and that's what has me coming back for more, particularly when it comes to this series. Aside from the romance between Newt and Freddy and the father-daughter dynamic between Newt and Millie, I devoured A Change of Pace's side stories plus the other characters, including the non-human ones! Five-plus stars.  ♥

A Change in Tide (book one) - five stars - My Review

A Change of View (book two) - five-plus stars - My Review

Purchase A Change of Pace on Amazon | B&N | iBooks | Kobo.