Review: A Change in Tide by Freya Barker (Northern Lights #1) 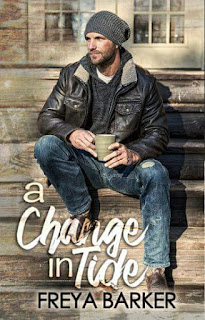 I've read a few of Freya Barker's past releases, but I must say that her Northern Lights series starter is her best work so far. A Change in Tide isn't the sports romance it's categorized to be on Goodreads, but what it is is a well-written contemporary love story about two people who find a new beginning with each other. It's a slow-burn romance, one with a mild bit of angst added to the mix (so definite bonus points from my end because I do love me my angst). It also includes a bit of a side story--another mini romance that occurs between two supporting characters--that's resolved alongside the one that happens between the main characters so you aren't left wanting, though I sure as heck wouldn't mind getting a more complete and in-depth look at what happened there.

Forty-two-year-old non-practicing midwife Mia Thompson has spent a decade and a half increasingly limiting her interactions and ventures out into the world. She prefers to live within the confines of her cottage with her loyal dog Griffin by her side and her best friend ready to pick up whenever she calls. But then Mia ends up with a new neighbor, one who's built a home that makes hers look even more minuscule in comparison. Her first image of him is seared into her brain, but what she doesn't realize is that she's made an impression on thirty-nine-year-old recently retired professional hockey player Jared Kesla. The tides of change are upon Mia, but will she allow herself to be dragged down and away because of fear of the unknown or will she dive in and go with the flow with Jared?

This isn't a short read, but the time flew by as I was getting to know Jared and Mia, as well as Jordy--Jared's younger sister--and a handful of memorable peripheral characters that helped to move the story forward. It was a slow-burn, but it never felt slow, if you get what I mean. As Jared and Mia learn more about one another, the reader gets to experience the evolution of their relationship, even as they take steps backwards and forwards. I really liked Jared, but I loved reading about Mia's transformation from the closed-off shut-in that she was at the beginning of the book to a more confident woman while continuing to be a work in progress. A Change in Tide is only the first in the Northern Lights series and I look forward to seeing where Freya Barker takes us next. Five stars. ♥

Purchase A Change in Tide on Amazon.