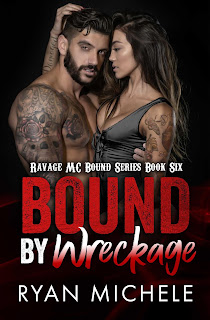 This series has long proven it's as addictive as its predecessor, with every new release leaving me craving for even more. Ryan Michele is back with one of my favorite motorcycle clubs, releasing Bound by Wreckage, the sixth and latest novel in her Ravage MC Bound series. With two of three of the Cruz children having found love, Lennox is in no rush to follow suit, not that he wouldn't want what his parents and siblings do. Nox's focus is on the club, the brotherhood that's extended into a family bound together by both blood and loyalty. When he comes across Carsyn Devero, it's an unexpected reunion between two former high school acquaintances who were very much aware of each other's presence years ago. Nearly ten years since they last saw one another, there's a connection there that demands to finally be explored, but Carsyn's life has been messed up for a decade and the last thing she wants is to drag him down with her. Nox, however, is a breed unlike any other, one that's been raised by the men and women of Ravage; he isn't one to turn his back on someone in need, especially when that someone is Carsyn.

I've got my fingers and toes crossed that I don't get spoilery in this review of mine because I've been itching to share my love for all things Nox and Carsyn. There were particular points in this book that made it difficult to read, not because of the author's writing but because of certain events that take place in the story, both to Nox and Carsyn as individuals and to the club as a whole. I can't go into specifics but what I do recommend is that the series be read in order; I'm even going to go as far as suggesting you read the original Ravage MC series too. Trust me, both the original series and the spin-off are fantastic reads and perfect for a weekend or two of book bingeing. Now, if you've already read all the other books prior to this newest one, then you may need a tissue, plus you may want to hang on to your seat because there are a couple of twist and turns in this story that could knock you for a loop! Let me just say that with that bombshell of an ending, I'm already itching to get my greedy hands on the next book in the series because I need more Ravage MC Bound, people! I'm giving Bound by Wreckage five of five stars. ♥