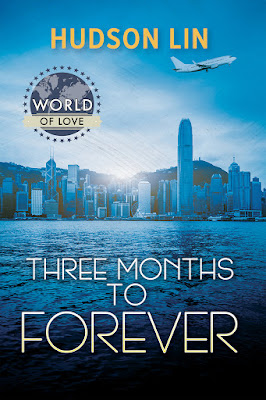 About Three Months to Forever
Ben is looking for an adventure when he accepts a temporary assignment in Hong Kong, but he never anticipated how his life might change when he meets a sophisticated older man named Sai. Their initial attraction is sizzling and soon grows into more as Sai takes Ben on a tour of the city’s famous landmarks and introduces him to the local cuisine. Sai stimulates Ben’s intellect and curiosity, and for jaded corporate lawyer Sai, Ben’s innocent eagerness is a breath of fresh air. It would be so easy to fall in love….

But nothing is that simple. Sai’s job forces him to do things that violate his morals, and his relationship with his family is a major obstacle to any lasting relationship with Ben. Back in Toronto, Ben’s father is ill, and can he really leave behind his home for a man he’s only known for a short time? With the clock ticking, they must decide whether to risk it all and turn three months into forever.

Read my five-plus-starred review of Three Months to Forever.

“What do you want to do before dinner? We could take a gondola ride....”

Ben perked at the mention of the gondolas. He’d forgotten the Venetian in Macau was essentially a replica of the Venetian in Las Vegas, complete with a canal and gondolas for hire.

Sai laughed at his reaction, slapping Ben’s ankle lightly. “That’s what I thought. Go take a shower, and then we can go downstairs.”

He was tempted to invite Sai into the shower with him—it was definitely big enough for both of them—but Sai had already wandered back out to the living room, cell phone in hand. And then a minute later, the sounds of the TV filtered in. Ben sighed. So he’d shower alone. But damn, he’d like to get wet with Sai at some point. The thought made his dick plump as he stripped and stepped under the warm spray.

Sai popped in for a shower after Ben was done, and when he came out with his black hair slicked back and wet, Ben wanted nothing more than to run his fingers through it and drag Sai to bed. He settled for some lingering kisses, lazy and sweet, right before they headed out.

Finding a gondola wasn’t difficult—they were lined up waiting for passengers, and the canal looked a little crowded with the number of slim boats drifting past each other. They settled in one, and Ben snuggled down when Sai reached his arm around the back of the seat.

“Tell me, Ben,” Sai said quietly. “Why did you really want to come to Hong Kong?”

Surprised by the question, Ben glanced over to find Sai gazing out at the stores that lined the canal. “What do you mean?” They’d had this discussion before, a number of times, if Ben remembered correctly.

Sai didn’t look at him when he continued. “You have a good life in Toronto. A good job. A good apartment. Many friends. I’ve been to Toronto before. It’s a very nice city. You have a good relationship with your family, and they don’t live far away. Why would you want to leave that all behind?”

“Because that’s all really boring.” Ben’s heart thudded in his chest as he put words to an idea that he’d only ever allowed to exist in his mind. “It’s the same thing every single day. The same routine of work and home, work and home. Going drinking with friends in the evenings and then more drinking with friends on the weekends. I go visit my parents every once in a while, but other than that, it’s the same thing day in and day out.”

He knew he sounded like a spoiled brat, discontent with the happy, comfortable life he had the fortune of being born into.

“But you want something more.” It was a statement. Not a question. As if Sai had read the yearnings of his heart.

“Yeah. I mean, I don’t want to sound ungrateful. I’m really lucky to have what I have. But I’ve always wondered if that’s all there was to life. Just....” Ben sighed. “The same old thing.” He paused, his next words caught in his throat. But when Sai didn’t fill the silence between them, Ben let them out into the world in a whisper. “Isn’t there something more substantial than just that? More... significant?”

Their gondola driver was singing; he had a nice voice. But Ben wasn’t listening to what he sung. He wasn’t looking at the colorfully painted ceiling or the bright lights of the stores they drifted past. It was just him and Sai in the open privacy of their gondola ride.

It was several moments before Sai spoke. “Have you found those things in Hong Kong?”

He felt more than saw Sai gazing at him, those dark eyes watching for each change in expression. Hong Kong was fun, different, exciting. But did it make life more significant? “I don’t know.” Ben turned and met Sai’s eyes. “It’s challenging. Figuring out a new city. The culture is so different from what I’m used to. The language....” He shook his head and threw his hands in the air in defeat. “But I like it. I like that I don’t feel completely comfortable here.”

Sai cocked his head, and his lips tilted into a teasing grin. “A little.” “Shut up.”

Sai’s grin grew to a full-blown smile and then laughter, the sound

rolling through Ben in waves of satisfaction. He loved that he could make Sai laugh.

“I like it here.” Ben said it again in all seriousness, gazing at Sai and realizing he didn’t just mean the city.

The laughter faded from Sai’s eyes and was replaced by that dark, brooding look that made Ben’s insides tremble. He knew Ben wasn’t just talking about the city either. One month down and two to go. Two more months to get to know Sai and fall in love. Ben wasn’t there yet, but he had a feeling he could be, if they continued down this path and let the current of the waters drive them forward. The alternative was to jump off the boat, but even the thought of it made Ben feel like he would drown.

Sai blinked and looked away first.

Their gondola ride came to an end, and the boat pulled up to the steps that would take them back to the real world. Ben wanted to stay on the boat and have another go-around. But Sai had already stepped out and was reaching his hand back to help Ben off.

When he slipped his hand into Sai’s, he got a reassuring little squeeze. It wasn’t much, and it didn’t resolve the question of what the hell they were doing with this little relationship they’d developed—but it was enough for now. Ben squeezed back.

About Hudson Lin
Hudson Lin was raised by conservative immigrant parents and grew up straddling two cultures with ofttimes conflicting perspectives on life. Instead of conforming to either, she has sought to find a third way that brings together the positive elements of both.

Having spent much of her life on the outside looking in, Hudson likes to write stories about outsiders who fight to carve out their place in society, and overcome everyday challenges to find love and happily ever afters.

When not engrossed in a story, Hudson knits, drinks tea, and works the 9 to 5 in the beautiful city of Toronto, Canada.