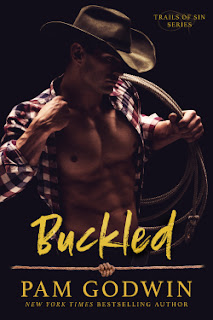 A hard fuck, a vanilla tumble, a red welt, a tender kiss—I love her in all the colors and levels of intensity, and she lets me.

I'm a lucky son of a bitch.

Gah! This second book in the Trails of Sin series had a completely different story line from the series starter, Knotted, yet managed to strengthen those elements that tied the two books together. So yes--GAH! Because I'm sorry, not all series that have a shared story arc while still allowing each book to stand on its merits can do so seamlessly. But then again, this is Pam Godwin's genius at work, and she's pulled it off from the Knotted to Buckled.

His twin brother Jake and Conor Cassidy, the only girl Jake ever loved, may have finally found their way back to each other, but twenty-four-year-old Jarret Holsten knows their plans for revenge and retribution are far from over. And then a complication named Maybelline Quinn comes to Sandbank, Oklahoma. The twenty-six-year-old is strong-willed and independent, and Maybe's proving to be a pain in his ass...as well as a temptation to other parts.

While Jarret and Maybe's story may be able to stand on its own pretty well, I'm going to go ahead and recommend that you read the books in the Trails of Sin series in order. There's A LOT of back story that comes into this second book, and in order for any reader to be able to fully comprehend and appreciate exactly why the Holsten and Cassidy siblings have been working on their plans for so long and why they're committed to seeing them through.

I don't want to give a whole lot away because there are certain twists in the story that not only threw me for a loop but left me anticipating what could await Jarret and Maybe plus Jake and Conor as well as Conor's older brother Lorne plus the woman I suspect he'll be paired up with. I had a feeling not putting a permanent stop to one particular villain would bite them in the butt...and well, it may look like things will get worse before they get better.

Everything about this second book had my attention. From the enemies-to-lovers feel of Jarret and Maybe's relationship to the undeniable heat that flared between them all throughout, plus the Godwin-esque goodness of kink and intrigue, you're going to want to buckle in (pun not intended...maybe) and hold on for a ride that'll make you beg for another jpy go-around. Pam Godwin has left me desperate for even more with Buckled. Five-plus stars. ♥

Read my reviews for the Trails of Sin series: