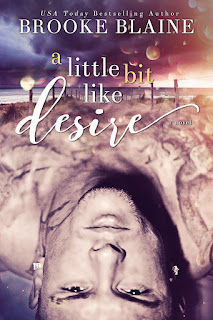 “You're too good to be fucking true, you know that?” I said.

Trent smiled up at me, the cloudy haze of desire clearing from his eyes just long enough so show me the flicker of something more in them. “Funny, I was thinking the same thing about you.”


Le sigh. This book was a little bit like...everything. The wait between the South Haven series starter, A Little Bit Like Love, and the second novel and the latest from bestselling author Brooke Blaine, A Little Bit Like Desire, was nearly a year, but after reading the latter, well, suffice it to say that Blaine made sure that the wait was more than worth it. From the first chapter to the very last page, this book had a firm hold on my attention and an even firmer clasp on my heart. This can absolutely be read as a standalone, but do yourselves a favor and read the first book as well.

Thirty-two-year-old Shaw Jennings leads a pretty sweet life. He owns Body Electric Tattoo and is a sought-after tattoo artist, has a twin brother who has his back and vice-versa, and has the best friends a guy could ever ask for. He can basically have any man he wants in his bed, but while a random hottie can elicit a reaction from his body, his heart is another matter. There's never been anyone to make him want to be with them for more than a night...until the lead singer of his favorite band arrives in South Haven, Georgia and Shaw's life is forever changed.

At thirty, Trent Knox's life is in limbo, having turned his back on his band, TBD, and walking away from the dream that had turned into a disappointment twelve years later. A bona fide rock star is one thing, but he wants to be more than the frontman singing the songs--he wants to write the songs that he hopes people will listen to. Maybe taking time off in the place he visited during the summers of his childhood will help him focus; instead he finds a muse in the form of a gorgeous man with ink on his skin. It looks a tad like Shaw is about to get under Trent's skin.

I'll say it again: le sigh. Seriously, I've lost count of the number of times I grinned like a crazy person while reading this book along. This starts off with one of the hottest first chapters I've read in a reeeaaalllllly long time, but what follows is a delicious slow burn of a story. Don't let the title fool you--there's a WHOLE LOT of desire that goes on between Shaw and Trent, the kind that creates a decadent sort of sexual tension that leaves the reader anticipating when everything boils over and they finally give in. When these two do, goodness me; just have a fan on standby.

The desire's there but alongside the lust comes the intertwining love and friendship--not just between Shaw and Trent but also among the supporting characters that are there for them. This is a running theme in Brooke Blaine's South Haven series, and I could never resist a wonderfully written story that's got heart and heat and far more than a romance. I loved Shaw and Trent equally and they've done this series proud. Of course, that simply means the bar has been pushed even higher for the next one to come. A Little Bit of Desire is a whole lot of five-plus stars. ♥

Read my reviews for the South Haven series: